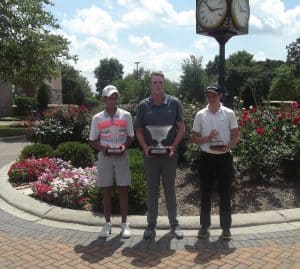 Deon Germishuys and Nikhil Gopal will start the Junior North and South Championship in North Carolina buoyed by a one-two finish on the Tarheel Junior Tour in the United States last week.

Continuing GolfRSA’s recent success on the international stage, Germishuys from Western Province claimed a six stroke victory on eight-under in the 8th Grandover Junior Amateur. Gopal from KwaZulu-Natal finished second on 142 at the Grandover Resort in Greensboro.

In-form Germishuys arrived in the United States after helping the GolfRSA Boys team to a fifth place overall in the Toyota Junior Golf World Cup in Japan.

The reigning Sanlam SA Amateur champion Germishuys opened with a four-under 68 to lead the field and made a fast start in the final round when he holed a 10-footer for eagle at the second hole.

“I bogeyed the second when my approach shot ran through the green, but I made birdies at eight and 13 to go three-under” said the two-time Nomads SA Boys U-19 Stroke Play champion.

“I dropped another shot at 16, but finished on eight-under with another eagle at 18 where I hit driver, 6-iron and boxed another 10 foot putt. It was nice to play a tournament before the Junior North and South to get the juices flowing.”

Gopal mixed two bogeys and a double bogey with six birdies over the two rounds.

“The course was fantastic,” said the 17-year-old from Victoria Country Club. “I hit the ball great and I putted well and I managed to bounce back nicely after bogeys.”

The first Bridge Fund Manager Junior Series consisted of 16 events and teed off in July last year with eight events in the South and eight in the North. The eight winners from each region played off for the respective spots into US Junior Championship.

Gopal travelled to Ekurhuleni to compete at Benoni Country Club, where he tied for the lead with local favourite Ryan van Veltzen. After four extra holes, both players were declared winners when darkness forced the organisers to call off the play-off. Gopal edged out Van Veltzen by one shot in the North Final at Royal Johannesburg and Kensington to book his berth at Pinehurst.

Eighteen-year-old Germishuys from Strand won the inaugural event at Royal Cape and claimed a second title at Kingswood.

The Ernie Els and Fancourt Foundation golfer chipped in at the 18th hole at King David Mowbray Golf Club to win the South Final and a start in the world-class United States Golf Association event.

The first and final rounds will be played at the Number 8 course. The second round of the 54-hole event will be contested at the Number 2 course that hosted the 2014 U.S. and U.S. Women’s Opens.

Bridge Fund Manager Junior Series organiser Peter Little from the South African Golf Development Board took the lads around Pinehurst 2 in a cart and the pair played Pinehurst 8 in the official practice round on Sunday.

“They had a really good look at Pinehurst 2, especially the greens, and both juniors commented that it was one of the most challenging courses they’ve seen,” said Little.

“They had a very good practice round on Sunday at Pinehurst 8. Both players really like the course and feel that they could do well in this tournament.”