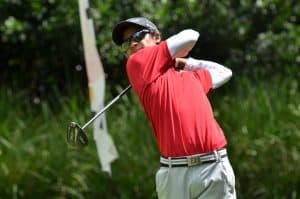 Bhana – the top-ranked U-17 golfer in the country – has been one to watch for some time.

The 16-year-old joined eight other hopefuls at the crack of dawn to fight for one of five spots into the 64-man match play field and par on the first hole was good enough to gain him a start.

Not many expected the Country Club Johannesburg junior to have the firepower to overcome the in-form Jarvis.

“It was such a privilege to play against Casey,” said Bhana after his 3 & 2 win. “He’s a great player and I had to work hard to stay focused on my game and not get caught up in the score.

“When I made birdie on the par-three 12th to go 4 up, I knew I had to play conservatively, so I stopped chasing birdies and tried to let Casey do the running. In the end it was enough and I couldn’t be happier with the result.”

Bhana’s next opponent is fellow GolfRSA National Squad member Jaden Deltel, who eagled the 18th hole on the East win his match against Armand van Dyk from Woodhill 1-up. 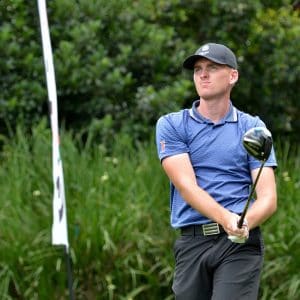 The England Golf squad member eventually prevailed, winning 2 & 1 over Ernest Ludick who, like Bhana, faced an early morning playoff to qualify for the match play stage.

Meanwhile Dreyer, the champion in 2009, continued to surprise.

Superb iron-play and putting netted the Eagle Canyon golfer a share of fourth in the stroke play qualifier and he brought that game to his first match. Dreyer reeled in four birdies on the bounce from sixth on his way to beating John-William Blomerus, 31 years his junior, by a score of 7&5.

The GolfRSA Champion of Champions winner will face Kenyan golfer Adel Balala in the top 32, who birdied his last two holes to win his first round match 1 up.

In another upset, Yurav Premall – the runner-up in the African Amateur at Glendower last week – lost out to 2014 finalist Altin van der Merwe.

In a tight match that never went more than 2 up in favour of either player, a birdie on the par-five final hole proved to be decisive for the Nelson Mandela University student, who edged the No 4-ranked Premlall 1 up. He takes on Beachwood’s Daniel Bennett in the second round.

Another favourite to fall included National Squad member Christiaan Burke, who succumbed to Ulrich Steinhobel – another early qualifier – on the 19th hole.

Then there were comfortable 6&5 wins for GolfRSA No 1 Martin Vorster and in-form Kieron van Wyk over Wade Jacobs and Reece McKain respectively, while Paarl Golf Club’s Ethan Smith romped to a 6&4 win over home favourite Mandla Dlamini.

The second and third round of the men’s SA Amateur will take place on the East Course tomorrow, where the field of 32 players will be culled to eight contenders.