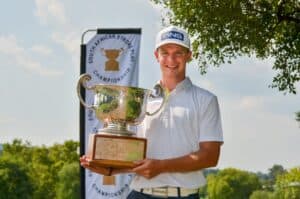 24 February 2022 – Jonathan Broomhead capped an unforgettable week at Randpark Golf Club with the South African Stroke Play Championship trophy in his arms, a first international victory under the belt and the roaring applause of his peers and appreciative fans ringing in his ears.

Three off the pace at the start of the final round, the Durban golfer began the final push with a bogey start, but 17 holes later, Broomhead boxed a par putt on the 18th hole of the Firethorn Course to win the GolfRSA flagship event.

The 2022 champion edged GolfRSA No 1 Christiaan Maas by two shots and finished four strokes ahead of Scotland’s top-ranked Rory Franssen. GolfRSA National Squad member Christiaan Burke and Sam Bairstow from England tied for fourth on 22-under.

“It all felt very unreal after I sunk the final putt, and it still feels a little unreal if I’m honest,” said the soft-spoken Broomhead.

“It’s been an unbelievable week; unforgettable. Today we had the best amateurs in the country and some of the top golfers from Scotland and England in the top 10, contesting for the title, and to come out on top is the most incredible feeling ever. This is definitely the best week of my life.”

Broomhead had to put his golf on the back burner last year as he completed a B.Comm Business Management degree, and made a mediocre start to the 2022 season in the first couple of provincial events. 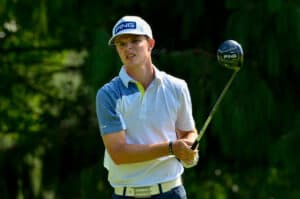 However, he gained momentum at the start of the GolfRSA South African Swing and was certainly trending towards a big finish. It began with a tie for second in the 36-hole qualifier in the SA Amateur Championships at Royal Johannesburg and Kensington, and he reached the quarter-finals, where he was knocked out by the 2022 champion Kyle de Beer. Then a sixth-place finish in African Amateur at Leopard Creek followed.

“I played nicely leading up to this week, but I didn’t have any high expectations,” said the Pinetown native.

“It was great to shoot some good numbers though, and I only gave up three shots in the first three rounds. My only game plan for the final round was to play my own game and to see where it takes me. You can only control your own shots and your own decisions out there, so I stuck to my game plan in the final round.”

Maas, the 2021 SA Amateur champion and clear favourite at the start of the round, began the day on 24-under.

He birdied the first while Broomhead had a bogey start. “Just like in the third round, I hit an errant tee shot and poor second, but I was able to bounce back with a birdie on the second,” he said.

“Maas dropped three, birdied four and dropped five, while I made a series of pars. Then I birdied the sixth to get within two.”

Maas raced ahead again with a brace of birdies around the turn but lost the advantage with a double bogey on the par-4 11th. Then Broomhead eagled the par-five 12th, and the resulting four-shot swing proved to be the turning point.

“If Burkie or I was going to catch Maas, it had to happen on the 12th. I had 336m into the wind and I took a 3-iron and hit to 20-feet right of the flag. That tied us up on 24-under, and from there I just focussed on making pars and taking the birdie chances when they came up,” he said. 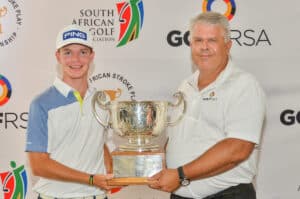 “We both birdied 13 and 14 and we both missed short putts for birdies on the short hole. On the 17th, I hit a 7-iron with a bit of a draw to the flag. It pitched middle green and released to 4 feet, and I boxed the birdie putt.

“Playing the last hole, I didn’t realise I had a one-shot lead. I just wasn’t thinking about it. I hit a good drive and had 191m to the flag. I hit a good 6-iron, but it released a bit, coming to a stop about a metre off the green. I hit the putt a little too hard and it ran past, and I had five-footer coming back.”

Maas, meanwhile, had to splash out from the left greenside bunker and when his par-putt missed the target, Broomhead had to face the five-footer for the win.

“At this point, I knew the putt was for the win. I kind of saw the line when the ball roared past the hole, but I wasn’t exactly sure, so I just trusted it,” Broomhead explained. “I didn’t know if I should laugh or cry when it dropped. What a moment. It was hard to take it all in, and I was pretty choked up when I saw all the players on the embankment waiting for me.”

Broomhead had a quiet celebration with his Oupa, Gran and Aunt at McGinty’s in Benoni, but he is certain there will be big welcome waiting when he gets home on the weekend.

“I get it now when you hear the pros say this means the world, because this really is a life-changer. I am so grateful to my mom and dad (Lynn and Mark) and my brother Jason for their unwavering belief in me. And to the guys at MURC Athlete Development, who work with me on strength and conditioning. My biggest thank you goes out to Philip Grant, who has been backing me financially and who never stops telling me that I can win. I am so pleased that I can pay back his belief in me with this incredible achievement.”