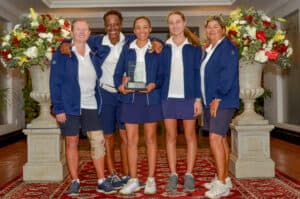 13 October 2022 – Border’s Demi Flanagan, Kesha Louw, Millie Dondashe and Sanet Pieterse had a huge incentive to win the promotion battle in the 61st South African Women’s Inter-Provincial Tournament and they pulled it off with a classy performance at Silver Lakes Golf and Wildlife Estate.

“We won the B-Division stroke play qualifier last year but lost out to Western Province B in the match play,” Flanagan, the captain, explained. “When we learned that the seeding round would be abolished in 2023, it was all the motivation we needed to finish the week at the top.”

In two very close encounters, Border beat Mpumalanga 3.5 – 2.5 in the first round and drew their match against Western Province in round two.

“We went into the final round at the top of the log with 3 points, and we had a slender 1-point lead on Gauteng North, who we were playing on the final day,” Flanagan said.

“We either had to win the match, or draw it, but losing was not an option. We’ve been in the same position before and this time, we were determined to pull it through.”

The teams started the afternoon singles session with a win each in the foursomes, but reigning SA Women’s Amateur Stroke Play B-Division champion Lea van der Merwe made quick work of her game against Pieterse. The Gauteng North B rookie won 6 & 5 to put the Daisies in the lead.

Fellow rookie Kaylee Webster beat Dondashe 3 & 2 and Border looked to be in real trouble, but the captain downed Lameez Kourie 3 & 2 and with her vital win, victory was back on the cards.

GolfRSA National Squad member Louw was all-square with Lizemari Richter through 16 when her team-mates arrived to lend their support.

“Kesha might only be 15 years old, but she is such a fighter,” Flanagan said. “Somehow, she found an extra gear to beat Lizemari to secure the win for us on 4 points. 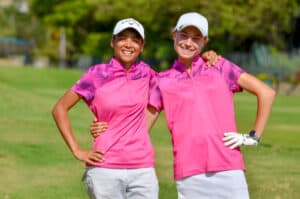 Most Valued Players Demi Flanagan and Kesha Louw from Border

“I am stoked for the team. We don’t get to play or practice together much because we are in different areas, but when we got on the golf course, we come together as a unit and we play for each other. We’ve worked really hard for this, and it’s absolutely fantastic that we’ll be teeing it up in the top draw next year.”

“We are simply thrilled by the exceptional performance of our team at the IPT. The team is made up of a mixture of youth and experience and they motivated each other to achieve their best. We are looking forward to the challenge in the A division next year.”

Western Province B downed Mpumalanga 3.5 – 2.5 to draw level on 3 points with Gauteng North B, but the Daisies clinched the runner-up spot with 10 games points to 7.5.

In the B-Division B2 Section, North West came up trumps after defeating log leaders Free State 3.5 – 2.5 in a battle royale on the final day.