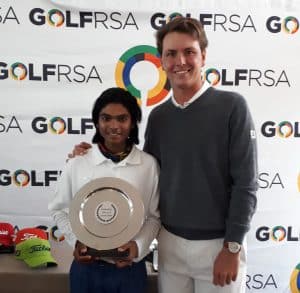 The 13-year-old from Sandton was two off the pace in the Under-15 Challenge after an opening 71 at the Outeniqua Course at Fancourt.

He raced six shots clear with an even-par 72 in the second round at Kingswood and his lead was never threatened during the final trip at the links layout. A final round 75 netted Bhana a four-shot victory on two-over 218.

“It was quite tough to go out there with such a big lead,” said the Crawford Prep scholar. ”I tried to do what the top golfers do. I stayed in the moment and I played shot-for-shot. And I forgot about the bogeys as quickly as they happened.”

Bhana already has two Nomads SA Boys Under-13 titles to his name and the Gowrie SA Under-15 Challenge trophy on the mantle at home, but he was delighted to take this trophy home.

“This was a really great tournament at two incredibly challenging courses,” he said. “We played the first round in strong wind and rain at Outeniqua. Kingswood is very long, the rough is trouble and the greens are very fast. I really feel like I earned this win.

“I can’t wait to tell my principal and Mrs Lees from Crawford College. Mr Haig has been so supportive of my career and my goals and Mrs Lees promised that she will carry on from Mr Haig and support my golf. I hope to win one or two more this year and I want to play more against the older juniors, because you learn a lot from them.”

Ivan Verster from Pinnacle Point closed with a 71 to take second and Leopard Park’s Stefano Marchetti returned an even-par 72 to finish in third on eight-over.