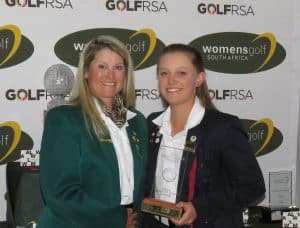 1 August 2020 – GolfRSA is delighted to announce that Womens Golf South Africa President Sarah Braude and GolfRSA’s top ranked Caitlyn Macnab both made the short-list of finalists for the 2020 Momentum gsport awards.

Braude stands opposite Springbok Women’s captain Babalwa Latsha and Virginia Mabaso, Development Co-ordinator for Rowing South Africa in the Women of the Year category, while Macnab made the shortlist with Caitlin Rooskrantz (gymnastics) and Phakama Yantolo (fencing) in the Emerging Athlete category.

“We are extremely proud of Sarah and Caitlyn’s recognition in this year’s Momentum gsport awards,” said GolfRSA CEO Grant Hepburn.

“Sarah’s passion for women’s golf development led her to golf administration in 2011 and following her tenure as the President of the former Western Province Women’s Golf Union, she embraced her role as the Vice-President of Womens Golf South Africa in 2017.

“Under the umbrella of the governing body GolfRSA, Sarah’s contribution to growing the game is evident in the vast development programme that has been established across South Africa in the last three years and the ongoing success of the GolfRSA Squad programme.

“Sarah took the helm at Womens Golf South Africa just after the government issued the hard lockdown due to the Covid-19 pandemic and she has guided women’s golf brilliantly in these troubled times.

“During the process of compiling GolfRSA’s comprehensive Risk Mitigation Strategy and Safety Protocol Documentation for the Department of Sports, Arts and Culture, Sarah proved invaluable with her eye for detail. She made a massive contribution in our successful bid to re-open golf at Alert Level 3 and she is very deserving of the Women of the Year award nomination.

“Caitlyn has been a dominant force in the women’s game and has held the number one spot in the Open and Junior Amateur rankings since the end of 2018. We are incredibly proud of her achievements.

“Kajal Mistry and Kaiyuree Moodley were double finalists in 2017 and 2019 respectively. GolfRSA won the Federation of the Year award and our media liaison Lali Stander won the first Woman in PR & Sport Award in 2018. To once again have double finalists is a nod to the incredible work and commitment by so many in the development and administration of women’s golf.” 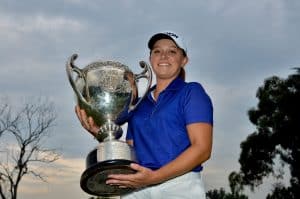 “She also captained the GolfRSA Proteas to a tie for second in the prestigious Astor Trophy in Canada last year, which marked our best result yet in the quadrennial showpiece between Australia, New Zealand, Great Britain, Canada and South Africa.

“Caitlyn is a great ambassador for GolfRSA both on and off the golf course and we are incredibly excited that she has been announced as a finalist in the 2020 Momentum gsport Awards Emerging Athlete category.

“On a personal note, I am honoured and humbled to be a finalist in the 2020 Momentum gsport Awards Women of the Year category.

“I would like to take this opportunity to acknowledge the many volunteers, administrators, coaches, partners and sponsors working ‘behind the scenes’ who remain passionate and committed to growing women’s golf in South Africa, as well as the enormous dedication of the players (and their families) striving to fulfil their dreams through playing this sport.

“Womens Golf South Africa is proud to provide a stage for young females and women to not only play the game competitively or socially, but to also dream big and to realise a future using golf as their vehicle to success.

“Thank you to gsport and Momentum for creating this platform to not only recognise the achievements and efforts in women’s sport but also be a voice and give exposure to women’s sport. Congratulations to all the nominees and this year’s finalists in the 22 categories – to be in the company of these amazing women is inspiring.

“I received the news that Caitlyn and I made the shortlist of finalists while I was playing golf. I was so thrilled that I literally did not think I would be able to stay calm enough to hit the next shot into the green, but it ended up being my best shot of the day – thank you Momentum and gsport.”

Winners are decided by a dedicated panel and public voting, so throw your support behind Braude and Macnab by voting every day on the gsport Voting Hall at gsport.co.za/voting.

The Momentum gsport awards are endorsed by Sport and Recreation South Africa.