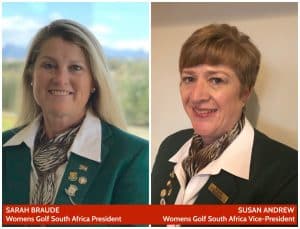 14 May 2020 – Womens Golf South Africa will be guided by more than 20 years of experience in golf administration by newly-elected President Sarah Braude and Vice-President Susan Andrew.

Braude and Andrew were unanimously elected during the Womens Golf South Africa (WGSA) Annual General Meeting, held via video conference at the end of April and the pair will hold office for the next three years.

Braude headed up the Planning & Environment Department in the eThekwini Municipality before practicing in the private sector on major infrastructure projects. She relocated to Melkbosstrand in the Western Cape where she began her journey in golf administration in 2009 as Lady Captain at Atlantic Beach Links.

In 2013, Braude changed her focus and emerged herself in golf administration and community-based media.

During her six year tenure on the Womens Golf Western Province Executive from 2011, she held the Presidents post from 2014 to 2017. She also held the position of Tournament Administrator at WGSA from 2012 – 2104 and was a finalist in the Administrator of the Year category of the Western Cape Department of Sport, Culture & Arts Awards.

Braude was elected Vice-President of WGSA in 2017, and worked closely with former President Sally Greasley for three years.

Andrew, current the president of Ekurhuleni Women’s Golf (EWG), is an independent Finance & Insurance Business Manager in the motor industry.

She became involved with golf administration as the Lady Captain of Benoni Country Club from 2013 to 2017. She also served as EWG Tournament Administrator for two years from 2016 and qualified as a Rules Official.

She took office as the union’s Vice-President in 2016 and was elected President a year later.

“It is a special honour for me to serve amateur golf through Womens Golf South Africa and,  notwithstanding us all having to navigate through these challenging times, I am excited to have the opportunity to build on the great work of my predecessors and expand on our objective to grow the game of golf in South Africa,” said Braude.

“Since the establishment of GolfRSA, the trust and approval from the WGSA, in particular the WGSA Executive, has been critical in consolidating and accelerating the work we started in 2015.

“We applaud Sarah’s appointment as president and we welcome Susan to the WGSA Executive. We have had a great rapport and understanding with the WGSA and we are delighted to continue this relationship going forward with Sarah and Susan.

“We would also like to salute outgoing president Sally Greasley. Her dedicated, calm and measured leadership played a huge role in advancing the unity in golf in South Africa and we wish her happy golf in her retirement.”

Greasley wished her successors well as they steer women’s golf in South Africa in the midst of the Covid-19 Pandemic.

“I have been tremendously privileged to have been at the helm of WGSA for the past three years, because it opened up opportunities I never expected to have.  Whilst challenging at times, it has been such a joy to be part of the amalgamation with the SAGA under the umbrella of GolfRSA.

“It has been a tremendous pleasure having Sarah as my Vice-President for the past three years.  She has been a great support to me at challenging times and I have valued her sage advice and support. I handed over the reins to Sarah and Susan in what is surely the most trying of times amidst the SA Lockdown, but I have every confidence that they will forge forward with GolfRSA and SAGA despite the current hardships to continue to grow amateur golf in this wonderful country of ours.”