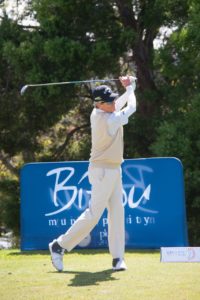 22 October 2019 – Mark McNulty’s bid for a SA Senior Open hat-trick took a hit as AP Botes fired two eagles on the way to a three-shot lead at Plettenberg Bay Country Club on Tuesday.

A gusting 33 km per hour easterly wind kept the 72-strong field on their toes, and Botes was one of only two players to break par on the day one.

The Hartswater golfer overcame a bumpy start in the chilly morning conditions with eagles on two par fives to set an unmatched clubhouse target of four-under-par 68.

Kingswood Golf Estate manager Mike Quinn returned a one-under 71 that featured five birdies, including three in a row from the fifth.

McNulty mixed a pair of bogeys with two birdies and will start the second round four shots off the pace. The 66-year-old finished shares third with former European Tour winners James Kingston and Roger Wessels and past Sunshine Tour champion Andre Cruse.

Kevin Stone – second in 2018 and the current Sunshine Senior Tour Order of Merit leader – is a further shot back in joint seventh with Portugal’s Roy da Costa, while Neil Cheetham from England and South African pair Callie Swart and Craig Lewthwaite round out the top 10 on two-over.

Botes was two-under through the turn after an eagle at the par five seventh and cemented his lead with a chip-in eagle on the 18th hole.

“It was a pretty bumpy start with two bogeys in the first five holes, but I finished nicely,” said the Hartswater golfer. “I’m pleased to be leading such a strong field and who knows, maybe I will celebrate my 55th birthday next week with a maiden Sunshine Senior Tour win here.”

Botes missed the fairway just left on the first, but hit his approach to five feet and sunk the putt for a birdie start.

“I made a good par on the second, but I missed a short putt for par on the third. Knocked in a 12-footer for birdie on the par five (fourth), but missed another short on five for par,” he said.

“On the seventh I hit driver down the middle, 2-wood to four feet and boxed for eagle. Then 10 straight pars. When we got to the 18th tee, I told my caddie Daniel I think we’ve made enough pars and it was time for a birdie.

“I hit driver down the middle and had 49 metres flag and we watched it bounce twice and disappear down the hole. Got a bit more than I bargained for, but I’ll take it. I’ve done a lot of work on my short game to prepare for the tournament and it paid off. But I also have to credit Daniel. He is one of the local caddies and he was brilliant around the course.

“This course is stunning. It is easily one of the best tracks on the Garden Route and really underrated. The layout and condition is excellent and with the wind today, the course really showed it teeth. I had a great time out there and now I just need to keep the consistency going for the next two days.”

The SA Senior Open, boasting a R500 000 purse, is hosted by Bitou Municipality and the first round included the Bitou Mayoral Pro-Am.

Funds raised by the Bitou Mayoral Pro-Am are donated to the mayoral bursary fund to support youth development initiatives in the region.

Furthermore, in line with a partnership formed with the Endangered Wildlife Trust in 2017, a percentage of the total prize fund is donated to support a specific endangered animal in the region a tournament is held.

About the Sunshine Senior Tour

The newly branded Sunshine Senior Tour is a partnership with the SA Senior Tour and the Sunshine Tour, under a license agreement for professional members aged 50 and older in South Africa.
The tour structure aims to provide a competitive tournament schedule to accommodate the membership and grow senior professional golf in SA.
Its members comprise of a number of champions that have competed on the PGA Tour, European Tour and the Sunshine Tour.