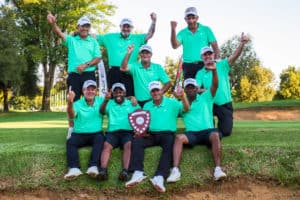 Border sealed the coveted promotion with a flawless performance in the SA Senior B Inter-Provincial at Pecanwood Country Club; credit GolfRSA.

27 April 2018 – Border produced an unparalleled performance over five rounds at Pecanwood Golf and Country Club to win the promotion battle in the South African Senior B Inter-Provincial, but Boland denied Border a double celebration in the Super Senior division on Friday.

Border was tied with Mpumalanga on six points, but trailed the log leaders by just half a games point as the two teams headed into battle in a three-way clash with Boland on the final day.

After the morning session wrapped up, Border started the Singles tied 2-all with both teams, however, Mpumalanga lost the Foursomes 1 – 3 to Boland and that was all the inspiration Border needed as the three teams started the Singles.

Denis Jones – a veteran of some 50 Inter-Provincials – prove once again that golf has no age limit.

The points added up as Norman Phillips downed Herman Adendorf from Mpumalanga 5 & 4 and dispatched Archie Steyn from Boland 3 & 2.

“We had to knuckle down to beat Free State in round four and that victory galvanised the team and motivated their final round performance,” said proud Border manager Uresh Pillay.

“A team is only as good as the sum of its players, but I have to single out Denis, Norman and Ben today. They gave the rest of the guys the spark to finish to job. By the time we reached the 14th hole, we already had five points in the bag against both teams and we just had to finish it off.”

Duncan Neil defeated Brian Naidoo, while Job Gobizembe at six and number one Jakkie Visagie both halved to deliver a 7 – 5 result against Mpumalanga.

“It was a tremendous team effort to guarantee the promotion,” said Pillay.

“These are eight guys who play for each other; if one guy is struggling, he knows seven guys has his back. The key to their success is team spirit and camaraderie. We must thank Boland and Mpumalanga for a fantastic final round tusslee. They were fantastic opponents and the sportsmanship out there was top class. And we would like to congratulate our Super Senior team on a fantastic runner-up finish.”

Boland trailed Mpumalanga and Border by one point at the start of the final day. After upsetting the log leaders in the Foursomes, Boland took a 3 – 1 lead into the Singles.

Phillips finished the week on nine points and edged out Smit for the Most Valued Player honour with half a games point, while Le Roux finished in third on eight points.

West and Eastern Province and walked away with the Super Series title at Pecanwood.

Boland lost a game to North West in the Foursomes and Lucas Lebeko routed Bruwer 8 & 7 to extend his team’s lead, however Palframan mowed down number one Hennie Kruger 7 & 6. Taking their lead from the captain, Snyman won 4 & 3 and Smit won 2 & 1 for a 4 – 2 victory.

Taking a 2 – 0 lead into the Singles against Eastern Province, Snyman won 4 &, but Bruwer lost by the same margin. Smit and Palframan both halved to seal another 4 – 2 triumph.

“The four of us played together in last year’s tournament at Pezula,” said Palframan, who shared the top spot in the Most Valued Player list on eight points with Wakeford Dondashe from Border.

“We developed a strong bond and that relationship droves us to play all out for each other this week.

“We had a very close match against Border in the first round, but we pulled it through and that win was key to our campaign this year. Coming into the final round, every guy on the side did his bit to take us to the finish line. A huge thank you from all of is to our manager Randall Newman for his support. This is as much his win as ours. This is truly a team celebration.”

SENIORS B DIVISION RESULTS – Final Round