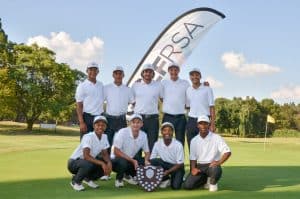 Boland won the B-Section battle for promotion in the 2018 SA Under-19 Inter-Provincial at Benoni Country Club; credit Ernest Blignault.

BENONI, 21 December 2018 – Boland proved once again that, even when teams look strong on paper, golf is still played on grass when the youthful side celebrated victory in the promotion battle at the 2018 South African Under-19 Inter-Provincial Tournament on Friday.

Over four rounds at Benoni Country Club, the three bankers and five rookies dovetailed to perfection.

Their exuberance, grit and determination was unparalleled and shot Boland shot to the top of the log with five victories.

A final big push to defeat closest challengers Border 8.5 – 3.5 on the final day earned Boland the B-Section title and a guaranteed return trip to the top draw just 12 months after their relegation at East London Golf Club.

“This is an incredible celebration for the whole team,” said team manager Karl Ochse as the team shared a round of high fives and hugs at the 18th green after the last putt dropped.

“I’ve played 12 IPTs and I know the gut-wrenching disappointment you feel when your team gets relegated, so I also know just how excited these eight young men are over this result.

“We managed to beat Eastern Province in the first round, but lost to Free State and the guys knew we couldn’t afford another loss. They fought like absolute demons from that point on and they can all share in the pride and joy as a team. This was a team effort all the way and everyone deserves to take credit. “

Following the narrow 5.5 – 6.5 loss to Free State in round one, Boland defeated Limpopo 8 – 4 and scored a clean sweep against Northern Cape in the second round. Mpumalanga was up next, and despite a valiant fight, Boland stepped away with a 6.5 – 5.5 victory.

“We came into this year’s tournament with five rookies and I don’t think anyone gave us a chance, but throughout the week, everyone on the team had a moment where they needed to step up and they all delivered,” said Ochse.

“Daniel Cronje won five of his singles and all his foursomes and we’re very proud of his joint second place finish on the Most Valuable Players List. Aidon Willemse and Jurie Mostert were just as impressive, tying for fourth with nine points.

“Our new caps Carlos Losper and Hezron Frieslaar were a revelation. I threw them into the deep end, playing then at two and four and pairing them at number one in the foursomes. They delivered a champions’ performance.

“Angelo Keffers and Hezron both finished in the top 10 on eight points and Keanan Keffers and Alric Rooi were the real troopers in the team. They had some really tough draws during the tournament, but they never stopped fighting until the last putt dropped.”

Ochse said their success was down to winning combinations and a strong team spirit.

“Golf is an individual game, but at tournaments like this, team spirit is often the factor that pulls it through for a team,” he said.

“The successful collaboration between Boland Golf Union, the South African Golf Development Board (SADBG) and the Golf Academy at Theewaterskloof School meant we came with six guys who already know each other really well.

“We also set our combinations before the tournament and that definitely added to the sense of continuity this week. I am incredibly proud of these eight boys and their commitment to win the promotion battle. They stuck to their goals and never got desponded. I also must applaud Boland Golf Union for their commitment to grow the game in our region and Shaun Adriaanse from the SAGDB, who is the driving force behind the golf development initiatives in Boland.”

Eastern Province also went out on a high note, hammering Mpumalanga 10 – 2 to finish in second place, while Limpopo edged out Border for third after beating Free State 8 – 4.