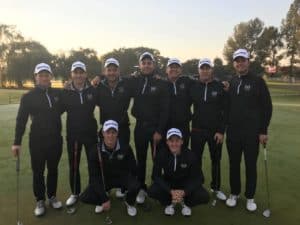 Boland thundered to an 11-1 victory in the opening round of the SA Country Districts B-Section at Potchefstroom Country Club; credit BGU.

14 May 2018 – Boland made a dream start in their quest to regain A-Section status and a solid first round showing gave Northern Cape a big leg-up in the promotion battle of the 2018 SA Country Districts at Potchefstroom Country Club on Monday.

Boland came out guns blazing and rode a clean sweep in the Foursomes against Border to an 11 – 1 result on day one.

Border number one Pieter Nel and Ben Jonas, who anchored the victorious Border team in their recent Seniors B-Section Inter-Provincial victory, prevented a whitewash when they halved against WP Botha and JF Conradie respectively.

The log leaders face Southern Cape next, who enjoyed a first round bye.

Having surrendered just half a point in the Foursomes, Northern Cape began the Singles with a 3 point lead. NJ van der Walt claimed first blood for Northern Cape when he eliminated Patrick Ludick 5 & 3 and victories from Andries Kori and Allan Toy pushed their tally to 6.5.

Eastern Province put up a fight to get back in the match, though.

Eastern Province will have a chance to recuperate with a second round bye, while Northern Cape go into battle against Border.