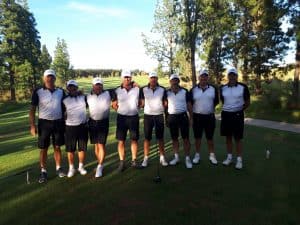 11 April 2019 – The battle for promotion in the SA Senior B-Division Inter-Provincial will come down to a scrimmage between log leaders Boland and Mpumalanga, while Border pulled ahead in the Super Senior contest at Katberg Hotel and Eco Golf Estate on Thursday.

SENIORS
Unbeaten Boland enjoyed a third round bye and still managed to lead the log after Mpumalanga routed Free State.

The log leaders are tied on 4 points with Mpumalanga, but will be taking a slight advantage in game points into the final round three-way contest with their chief adversaries and Ekurhuleni.

Mpumalanga will try to hunt down Boland for promotion in the SA Senior B-IPT at Katberg Eco Golf Estate.

Mpumalanga and Free State were 2-all heading into the singles, but number one Steve Smit and number eigtht Gavin Brough put the Mpumalanga on the attack.

Smit beat Butch Lombard 7&5 and Brough downed Johnny Barnard 5&4 to ignite the team’s fighting spirit. Andy Britnell (2&1), Cobus Clarence (2&1), Brian Naidoo (2-up) and Theo Bleeker (1-up) stepped up to the challenge to secure an 8 – 4 result.

The loss dropped Free State to third and, with 2 points and 14 game points, the team will essentially be playing for pride – and possibly third place – against Northern Cape in the final round.

Ekurhuleni is in pretty much the same boat. 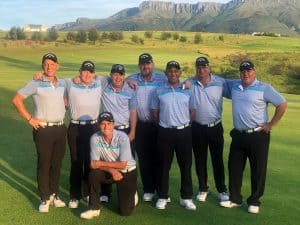 Jan Delport sunk a clutch putt in the dying moments of a tough game against a feisty Northern Cape team to eke out a 6.5 – 5.5 result. It was too little, too late, with the loss against Free State on day two costing the side dearly. With 2 points and 10.5 game points the team can finish in third at best, providing they defeat Boland and Mpumalanga.

Northern Cape and Free State will face each other in the other final round match.

SUPER SENIORS
Border, meanwhile, cemented their advantage with one round to play.

Wakeford Dondashe and Russell Gower won the opening game in the foursomes against Free State and Phillip Wolk and Dave Stephen halved their game to give Border the early advantage.

Dondashe lost the first game, but Gower beat Basil King 6&5 and Wolk downed Johan Mostert 2&1 to give the team a big cushion and Stephen squared the final game for a 4 – 2 win.

The victory over Free State moved Border to the top of the standings with 6 points and a handy 12.5 game points.

It will be all to play for in the final round when Border faces Ekurhuleni and Eastern Province in a three-way match for glory. Ekurhuleni’s 2 – 4 loss against Northern Cape saw the side tie for second with Eastern Province, who draw 3-all with North West.

Both teams have with 4 points and 10 game points.

In the final match, Northern Cape will take on North West and Free State.

SENIORS B DIVISION ROUND 3
Mpumalanga 8 vs Free State 4
Ekurhuleni 6.5 vs Northern Cape 5.5