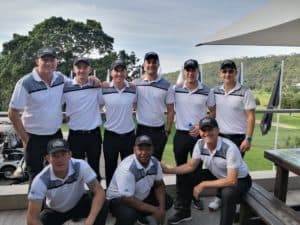 Boland burst from the blocks with an 8 – 4 win against Eastern Province in the B-Section promotion battle at the 2019 SA Country Districts at Plettenberg Bay Country Club; credit GolfRSA.

13 May 2019 – Boland and Mpumalanga deadlocked on 2 points each in the battle for promotion on day one of the SA Country Districts at Plettenberg Bay Country Club.

Boland had the early edge after winning three games in the morning session, but Eastern Province put up a fight in the singles.

Malan Potgieter shrunk Eastern Province’s deficit to 1 point when he knocked out Ryk van Schoor 4 & 3, but number one Daniel Cronje put Boland back on course with a 3 & 1 win against Rhalf Manuel.

W.P. Botha and Cedric Rooi added 2 more points to Boland’s tally and Anton Pieters and Coenraad Swanepoel scored another crucial point with halves in the final two games to secure an 8 – 4 win.

Mpumalanga – relegated in Potchefstroom 12 months ago – signalled their intent with a blistering start, taking a 3-1 lead into the singles.

Anton Steenkamp continued the beating when he mowed down Denzel Erasmus 5 & 4 and Jan Combrink at number eight defeated Gerhard Visagie 4 & 2.

Chris Zietsman, Mark Ferreira, Ian Jacobs and Devon Strydom kept Mpumalanga on a winning course, and Drikus Joubert at number one halved his match against Oswin Schlenkrich to guarantee a 9.5 – 2.5 start for the side.

The host union had a first round bye and will face Mpumalanga on day two, while Border and Boland go head-to-head and Eastern Province enjoys their rest day.