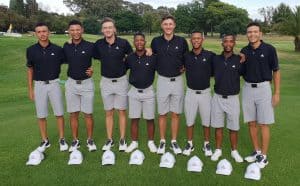 Boland defeated Limpopo and scored a clean sweep against Northern Cape to vault to the top of the B-Section standings in the SA Under-19 Inter-Provincial in round two at Benoni Country Club; credit GolfRSA.

BENONI, 18 December 2018 – Defending champions Ekurhuleni extended their lead in the South African Under-19 Inter-Provincial, while Boland sounded a stern warning to their opponents in the B-Section battle for promotion at Benoni Country Club on Tuesday.

Ekurhuleni threw down the gauntlet with convincing victories over Western Province and KwaZulu-Natal in the opening round and the host union continued to dish out punishment on day two.

The defending champions mowed down Gauteng North 8 – 4 and hammered North West 10 – 2 to move to the top of the log on eight points.

If they can keep their winning run alive in their third round match against Southern Cape, the local heroes would be in a strong position to defend their title in their final round tussle against neighbours Central Gauteng on Friday.

Southern Cape also opened with double victories and topped the log after day one, but the Garden Route side lost some footing during their second round bye.

Central Gauteng defeated KwaZulu-Natal 8.5 – 3.5 to overtake Southern Cape in the second spot in the standings. Both teams have four points, but the Lions have 22 game points against Southern Cape’s 16.5.

After three losses, Gauteng North handed North West a 10 – 2 drubbing to move to fourth in the log.

With both KwaZulu-Natal and Gauteng North having their rest day on Wednesday, North West will be gunning for points to get off the bottom rung. The 2017 B-Section winners go up against Central Gauteng and Western Province in round three.

Twelve months ago Boland was left holding the wooden spoon, but the young and feisty team that showed up at Benoni Country Club this week with six rookies are undoubtedly determined to reverse last year’s relegation at East London Golf Club.

Buoyed by a 7 – 5 victory over Eastern Province on day one, Boland swept aside Limpopo and scored a clean sweep against Northern Cape to catapult to the top of the B-Section log on Tuesday.

The eight-man side had a strong advantage heading into the afternoon session after beating Northern Cape 4 – 0 and leading Limpopo 3 – 1 in the Foursomes.

Jurie Mostert and Carlos Losper – who lost to Paul Mawasha and Christo Stears in the match against  Limpopo – rallied to beat Divan Snyders and Willem Gresse for a 12 – 0 result against Northern Cape.

Boland will be looking for another scalp when they face Mpumalanga in Wednesday’s third round.

Border, who led the log overnight with two victories in the opening round, drew with Free State and hung on to second spot in the standings on five points. In the remaining match, Limpopo banked two points for an 8.5 – 3.5 victory over Northern Cape to rise to third place on three points.

Border will be looking to re-take the top spot when the side faces Eastern Province and Northern Cape in a three-way match, while Free State and Limpopo have a third-round bye.