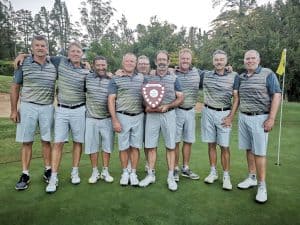 12 April 2019 – Boland and Border emerged as the undisputed champions in an epic final round battle for supremacy for glory in the 32nd South African Senior B-Division Inter-Provincial Tournament at Katberg Hotel and Eco Golf Estate on Friday.

SENIORS
Over the last three years, Boland started the final round unbeaten, but spoiled their promotion chances with a less than perfect performance…but not this year.

“We went into the final round tied for the lead with Mpumalanga on 4 points, and we threw down the gauntlet. We knew the final round would be a long, tough battle against Mpumalanga, so we put a huge effort into beating Ekurhuleni to boost our game points,” said team manager Charl de Villiers.

“The strategy worked. We started strong and beat Ekurhuleni 8.5 – 3.5. Mpumalanga also beat them, but only by 1 point. That gave us the game point advantage and we just kept our foot on the pedal against Mpumalanga until the final dropped.

“The match was poised on a knife’s edge, though. We halved one foursomes game and lost two others, so we were on the back foot heading into the singles. The guys knew the score and they stepped up to the plate.”

Andre van Dyk took first blood in the singles to level the score.

The reigning Senior Players champion mowed down Daniel Nyathela 5 & 4 to level the score and a 4 & 2 win from George Bezuidenhout put Boland in the lead for the first time.

Franz Lohbauer knocked out Theo Bleeker 3 & 2 to take back the advantage for Boland, but Gavin Brough and Brian Naidoo put Mpumalanga back in the lead with 2 & 1 wins.

“The guys all kept a cool head under pressure,” said De Villiers. “It went right down to the wire, but the single-mindedness of the players was incredible.”

When Dirk van der Merwe beat Andy Britnell 1-up to draw the match, Boland could finally draw a breath and celebrate.

“Every man on the team shares in this moment, but we want to single out Jorrie. He battled earlier in the week and we took a team decision to play him at number one. He said he would make us proud and he did, winning both his matches to make sure we take this trophy home.

“The team worked incredibly hard to put the disappointments of the previous years behind them and to come to this year’s championship with a fresh, determined attitude. We have a fantastic bunch of guys who fought until the last putt in every match. They never gave up and they have made me, and our union, incredibly proud.

“We had an incredible week here at Katberg. This place has to be one of the most well-kept secrets in South Africa and just a huge thank you to the staff and green staff for making the week so memorable.” 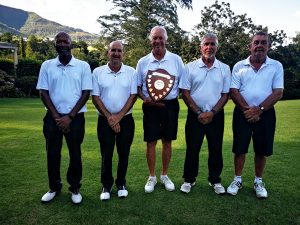 SUPER SENIORS
Border went into the final round with a 2 point lead, but like Boland in the Senior Division, the team had to pull out all the stops to hold off Eastern Province to win on game points.

Border defeated Ekurhuleni 4 – 2, but Eastern Province also scored against Ekurhuleni, beating the side 3.5 – 2.5.

Eastern Province led the foursomes 1,5 – 0.5 but Russel Gower beat Willie Prince 3 & 2 to level the score. Dave Stephen won his match against Zolile Nqana 2 & 1 to put Border ahead, but both Wakeford Dondashe and Phillip Wolk lost their games.

“You know, these guys have been playing golf for many, many years, so they know each other so well. There is a wonderful respect between the players, and the camaraderie and team spirits out there is so special. For the super seniors it’s a mulligan be competing at this level and they really revel in the competition.

“I am incredibly proud of this team. Every guy had a job to do. They never, ever gave up. They fought hard and when one player struggled, the other three stepped up. This is their win and I hope they enjoy the celebrations. The preparation for the A-Division starts when we get home.

“A final word of thanks to Eden Thomson and Greg de Doncker from GolfRSA for an incredibly well-run event and to the staff at Katberg. Not many of us had ever heard of this course and what a jewel we have discovered. Pristine greens, manicured fairways, magnificent scenery anyway you look and truly world-class hospitality from Stefan and his team. We hope to send many people this way in the future.”