DURBAN (6 March 2008) – Boland’s Jacques Blaauw (pictured on the right) remains on course for winning the amateur double after making it through to Friday’s final of the Glacier SA Amateur Championship at Royal Durban Golf Club.

Blaauw, the winner of the SA Stroke Play last month, beat Gauteng North’s Derik Ferreira 3 and 2 in Thursday morning’s quarter-finals and then won his semi-final match against Central Gauteng’s Michael Palmer on the 20th.

He will face Welshman Nigel Edwards in Friday’s 36-hole final.

Edwards came through the quarter-finals with a comfortable 6 and 4 victory over Adrian Ford, but then had to work hard to beat Western Province’s Cameron Johnston 2 up in the semis.

Blaauw and Palmer produced a thrilling semi-final. Both were all square through nine holes after Palmer claimed a brilliant half from the greenside bunker at the ninth.

Blaauw went 1 up on the 11th and was set to go 2 up on 13 before he three-putted from only 10 feet to give Palmer the hole. Palmer won the next two holes as well to set up a tense finish. Blaauw won the 16th and then holed a 15-foot putt on 18 to take the match into extra holes before his victory on the 20th.

“Those last couple of holes were really nerve-wracking,” said the 22-year-old, who attended college at Oklahoma City University for six months last year but had to return because of a lack of funds to continue his studies there.

But in that brief time he won his first tournament, the Texas Inter Collegiate, and was named an All American and the Phil Mickelson Freshman of the Year.

“I don’t regret having to come back because things have gone really well since then. I’ve had two big wins this year already and am in the final here,” he said, adding that his father, who works for the Correctional Services in the Cape, would be just as pleased with his performance.

Blaauw will face a stern test against Edwards in the final.

The world’s 27th-ranked player is seeking his second Glacier SA Amateur title in three years and is a veteran of four Walker Cup and three Eisenhower Trophy teams. 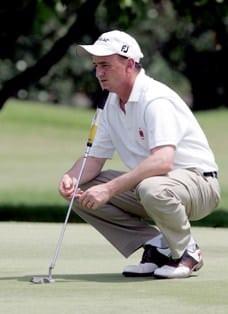 Edwards certainly looked unbeatable after racing to 4 up through seven holes in his semi-final against Johnston.

But Johnston fought back, and with a 50-foot putt for eagle on the par-five 14th and a victory on the 17th hole as well, he suddenly had a good chance of beating one of the amateur game’s formidable champions.

But at 1 down playing the par-five 18th, Johnston thinned his bunker shot over the green and then left his chip short before conceding the match.

“I had a chance at the last so am disappointed to finish the way I did,” said Johnston in what has been his best shot at a national amateur title.

Edwards was also not convinced he played his best golf in this match.

“I missed quite a few opportunities to close it out. But I’m delighted to be in the final again and I’ll certainly give it a good go.”

Scores from the quarter-finals and semi-finals of the Glacier SA Amateur Championship, played at the par-72 Royal Durban Golf Club on Thursday: