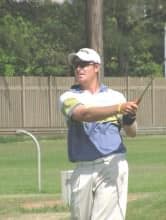 Playing on a Links golf course in the north of Wales is testing at the best of times, non more so than over this weekend.

South Africa’s national amateur champion, 22 year old Jacques Blaauw, who plays most of his golf in the Boland, managed his way through the testing conditions to record a 72 hole score of 303, fifteen over par, giving him a share of 9th place in the 2008 Welsh Open Stroke Play Championship decided on Sunday at the Conwy Golf Club.

The event was won convincingly by Englishman, Chris Wood. He finished six shots clear of the field with a 72 hole total of 289, one over par. He dominated the final 36 holes, recording rounds of 69, three under par, and 71, one under par, being the only player to play the last two rounds under par.

Trevor Muggeridge, of Glendower Golf Club, missed the cut by three shots, recording rounds of 80 and 78.

One shot further back was Derik Ferreira, of Centurion Golf Club, who had rounds of 80 and 79. His first round was ruined with a 10 on the par 4 16th hole. He started the hole at one over par for his round and finished it at seven over par, the ‘curse’ of Links golf. The penultimate hole caught the 19 year old Protea player in the second round where he recorded a four over par 8, putting paid to any hope he may have had in making the cut.