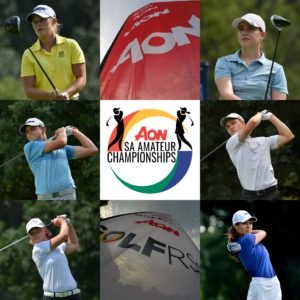 Macnab, the winner of the Aon South African Stroke Play title at Royal Johannesburg on her 18th birthday earlier this week, goes up against 14-year-old surprise package Kyra van Kan for the biggest prize in amateur golf in South Africa.

Macnab defeated Gabrielle Venter 3&2 in the quarter finals before edging No 2-ranked Kaylah Williams 3&2 in the semi-final.

The 18-year-old may head into the final as an overwhelming favourite, but she remains acutely aware that in match play golf anything is possible.

“I’ve got to go out there and stick to my game plan as I have been doing all week,” she said. “I know Kyra well since we both play for Ekurhuleni Women’s Golf. She is a real fighter so I can’t afford to let my guard down for a minute.”

For Van Kan, just reaching the final was beyond her wildest dreams at the start of the week.

She will be eager to keep her good form going after defeating Kiera Floyd 5&4 in the quarter final and former Youth Olympian Kaiyuree Moodley 1-up in the semi-final in a day of intense golf.

“It feels like I’m in a dream, but I’ve got to believe that I can beat Caitlyn tomorrow. I know I’m going to need to be really solid and hole a lot of putts, but I did it today against Kaiyuree, who is also a top ranked golfer. There’s no reason why I can’t do it against Caitlyn,” she said.

On the men’s side, South African No 1 Casey Jarvis takes on three-time Scottish cap James Wilson, knowing that a win will place him alongside some of the greats of South African golf as a winner of both the SA Stroke Play and SA Amateur in the same calendar year.

It’s a lot of pressure on his 16-year-old shoulders, but Jarvis – who shot -25 at Randpark Golf Club a week ago to win the SA Stroke Play title – feels that it is his time after edging former champion Christo Lamprecht 2&1 in the quarter-final and England’s Joseph 2&1 in the semi-final.

“I’ve just got to play the game I have been playing,” he said.

“It’s been working for the last few months and I’m really excited to have a chance to win the title. James is a really good player and to be honest I really haven’t been putting well all week, so I need to stay patient and hopefully the putts will start to drop.”

Scottish National Squad member Wilson from Balmore Golf Club will be hoping that experience counts in his favour as he looks to follow in the footsteps of Michael Stewart (2011), Brian Soutar (2012), Daniel Young (2015) and Craig Ross (2016) and become the fifth Scottish golfer to claim the title in the last decade.

The 23-year-old, who has a degree in psychology to his name, needed an eagle on the 19th hole to eliminate 16-year-old Christiaan Maas in the quarter final. He edged England’s Jake Bolton 3&2 to get into the championship final.

“Casey’s been shooting some great numbers, but I can’t focus on what he’s doing,” said Wilson. “All I can do is concentrate on my own game, follow the same processes that I have been doing and see what happens. I have had a great championship so far, and I really like the challenge the East Course poses. It’s a wonderful match play track, with four gettable par fours and a very demanding layout. It’s going to be a lot of fun and I’m looking forward to it.”

In the Women’s Flight Division, Ineke Brynard will also have some pressure on her shoulders to follow in the footsteps of older sister Shani, who won the B-Division title last year.

The De Zalze junior beat Elizabeth Lightley at the 21st Hole in the quarters, and defeated Kim Turgut 2-up to book a date with Ladina Semadeni. The Swiss golfer has been in South Africa for about four weeks and was thoroughly pleased to make it to the final in her first appearance.

“It’s such a great idea this, to hold the men’s and women’s championships together,” said Semadeni, who won 4 & 3 against Kamaya Moodliar – the B-Division winner of the SA Women’s Stroke Play on Tuesday – in the morning and beat Irene Nakalembe from Uganda 3 & 2 in the afternoon.

“It’s great to see so many people out here supporting the players and we are really enjoying the vibe and the courses. My favourite is the East Course; it just suits my game better. I’m excited to play against Ineke in the final; I think it’s going to be a great contest.”

Written and released by Lali Stander and Brendan Barratt on behalf of GolfRSA.