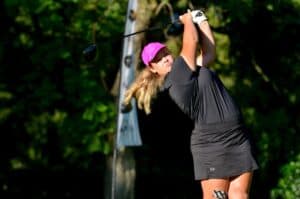 9 February 2022 – While the top seeds on both the men’s and women’s side advanced in the 120th SA Amateur Championships, there were a number of big-name casualties as the flagship events whittled down to their last eight players on Wednesday.

Women’s Stroke Play winner Kiera Floyd continued her march towards the double when she dispatched Ellandri van Heerden 2 & 1 in the first round and then accounted for Nicole Strydom 4 &3 in the second round.

“I am very happy with today’s result,” said the 17-year-old Serengeti golfer. “I continue to strike the ball well, and the putter is warming up. I’m excited to move to the East Course. I’ve had some really good rounds there and it’s definitely my favourite.”

The GolfRSA No 3 will face East London’s Demi Flanagan in the quarter finals, after the Ernie Els and Fancourt Foundation player toppled last year’s finalist Megan Streicher 3 & 1 in the first round, then routed Danielle Bekker 3 & 2.

Local favourite Reece Mckain rolled on in the men’s event as Proudfoot Trophy winner and No 1 seed. 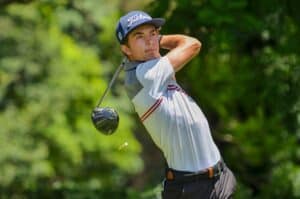 Mckain continue to impress, with 3 & 2 wins against Wiehan van der Walt in the morning session and England’s Zachary Chegwidden in the afternoon, to book a quarter final match against 17-year-old Pascal Gunther.

Bloemfontein’s Gabbi Venter was in sublime form as she knocked out Ineke Brynard 4 & 3 and Bea Breedt 7 & 6 to set up a quarter final against Marine Legentil, a winner over Casey Twidale (5 & 4) and Stephanie Barbaglia (2 & 1).

It was on the other side of the draw that the drama occurred.

Kesha Louw came back from four down with five to play to beat GolfRSA No 1 Isabella van Rooyen 1 up, with the 14-year-old making four straight birdies to finish. She lost out to Ernie Els & Fancourt Foundation member Crystal Beukes on the 19th hole in the second round, however. 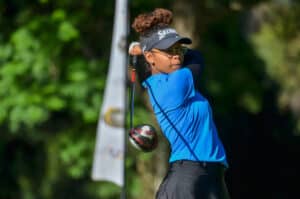 Beukes needed extra holes to win her first-round match too, edging Gia Raad on the 20th hole. The Stellenbosch golfer will take on Bronwen Doeg in the quarter finals.The Pretoria Country Club golfer took down Kim Turgut 4 & 3 before knocking out Stroke Play runner up Bobbi Brown 4 & 2 in a career-best performance.

“Kesha played some exceptional golf today. She barely made a mistake and she made it hard for me to claim any hole. The turning point was at the eight (17th hole), where I drained a really long putt and that changed my mental space completely,” said the BSc Human Movement student. “I stopped fighting her and just played the course. “I’m excited about the East Course and carrying this momentum into the quarter-finals.”

The final quarter final is a mouth-watering affair between GolfRSA No 1-ranked junior Samantha Whateley and Kyra van Kan, a finalist in 2020.

Jonathan Broomhead, joint runner up in the Proudfoot Trophy, also made the top eight last year before losing to eventual champion Maas. He will take on in-form Kyle de Beer, who failed to make the top 64 in 2021.

The Ernie Els and Fancourt Foundation player beat fellow national squad member Jordan Duminy 4 & 3 before battling to a 2-up win over Oliver Goldhill. 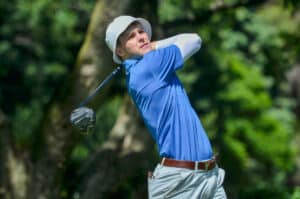 Durbanville’s Travis Proctor will take on the last remaining foreigner in Rory Franssen.

The Scot – a Proudfoot Trophy winner in 2016 – edged 16-year-old Jordan Wessels in a tightly-contested match the morning round before really turning it on in the afternoon round, beating Crismar Engelbrecht 8 & 6.

“The Scottish Golf National Squad come out here every year to prepare for our season back home, because the competition out here is strong and there are so many good players in South Africa. Plus, the weather in Scotland is terrible,” Franssen explained.

“I’m looking forward to tomorrow’s match and the other two tournaments in South Africa, especially the African Amateur at Leopard Creek. I will just make sure I put on my wide brimmed hat and wear plenty of sunscreen.”

The last quarterfinal of the day pits good friends and National Squad teammates Casey Jarvis and Sam Simpson against one another.

Jarvis, the 2020 champion, complete the weather-halted first round with a 3 & 2 win over 15-year-old SAGDB player Vuyisana Makama, before heading out again. He needed extra holes to get past Nash de Klerk and then edged No 5-ranked Yurav Premlall in a clash of the titans to make the final eight.

Jarvis and Premlall began representing Ekurhuleni eight years ago and were a formidable foursome pairing in the union’s three SA U-19 Inter-Provincial wins and its first Premier SA Inter-Provincial victory in 2019. However, this was the first time the duo faced each other in a match play competition.

“It was quite hard, because we are such good friends, and we know each other’s games so well. You always want to see a friend play well, but we just got on with it,” said Jarvis, who won the match 3 & 2.

Simpson also survived an exceptionally long day, having to complete his first-round match early – a 3 & 2 win over Dylan Melville – before securing wins over Dawid Opperman (1 up) and Handre Truter (7 & 5). 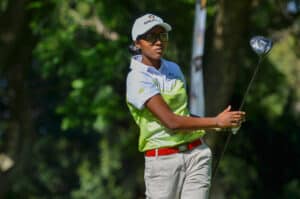 Le Keur is no stranger to the pressure waiting on the East, having reached last year’s semi-final. She knocked out Heather Kruger 3 & 2 and beat Holly Lau 2-up to keep her title alive. She plays Olivia Wood in the quarters, who advanced with 5 & 4 and 2 & 1 wins.

Lefifi suffered a narrow 1-down defeat last year, and the SAGDB golfer was all smiles after getting past Lizemari Richet (3 & 2) to make the top 16. She needed five extra holes, though to dispatch Tyla Potgieter for her place in the quarter-finals.

“It was a really, really long da,” said Lefifi, who won the 18th hole with a birdie to extend the match and wrapped it up on the 14th. “I can’t wait to get to the East Course. I know my way around it and I find it a lot less challenging than the West.”

Meanwhile mother and daughter duo, Liezl and Anika Smit, may end up facing each other in the 18-hole final on Friday. 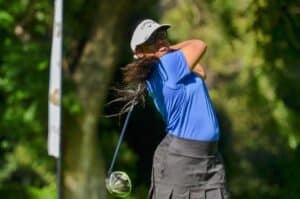