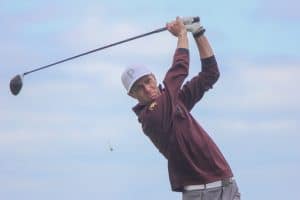 KIMBERLEY, 8 October 2018 – Defending champions Central Gauteng and Gauteng North made a fast start in the South African Mid-Amateur Inter-Provincial on Monday, while Free State and Mpumalanga threw down the gauntlet in the promotion battle at Kimberley Golf Club.

A-SECTION
Central Gauteng made a stirring start to their title defence when they pushed home 2.5 – 1.5 leads in the foursomes to 7.5 – 4.5 victories over both KwaZulu-Natal and Ekurhuleni.

Steve Williams, Kevin Sharp and Ruan Botha banked 3 points on both sides of the draw in the singles and Norman Raad halved both his games as the rest of the team pulled together to notch the 4 points on offer on the opening day.

With 15 games points, Central Gauteng vaulted to the top of the log, with Gauteng North a close second with 4 points and 1.5 games points

Gauteng North trailed Western Province 1.5 – 2.5 in the foursomes and North West 1 – 3, but the team dug deep for a magnificent comeback in the singles.

Ekurhuleni defeated KwaZulu-Natal 7 – 5 and Western Province edged out North West 6.5 – 5.5 to finish third and fourth respectively in the standings.

Ekurhuleni and Gauteng North will both enjoy a second round bye as last year’s B-Section champions Southern Cape joins the action on Tuesday. The Garden Route side goes up against North West and log leaders Central Gauteng, while Western Province will face KwaZulu-Natal. 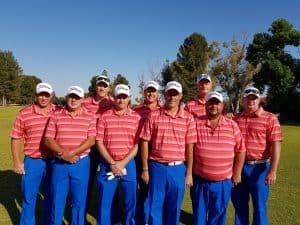 Two straight victories on day one helped Mpumalanga to a close second in the B-Section promotion battle in the 2018 South African Mid-Amateur Inter-Provincial a at Kimberley Golf Club; credit GolfRSA.

Free State and Mpumalanga made their intentions clear, starting the battle for promotion with two straight victories each.

After a solid start to lead Border 3 – 1, Josef Fourie, Lourens Erasmus, Jandre Nel, Ivan van der Merwe and Heinrich Erasmus racked up 5 wins and Nico Reyneke halved his game against Ben Jonas. Having dominated the foursomes 3.5 – 0.5 against Boland, Fourie, Erasmus, Nel and Jacques Schutte made sure that Free State came up trumps twice.

The foursomes between Eastern Province and Mpumalanga ended in a 2-all draw. Rikus Nel, Eddie Daniel, Daniel Clifford and Ryk Lacock delivered the wins and Eddie Wilken halved with Ryno Ferreira to help his team to seal a 6.5 – 5.5.victory.

Mpumalanga started the singles with a 2.5 – 1.5 lead over Limpopo and pushed all the way to an 8 – 4 result. Nel, Daniel and Lacock once again delivered, while Stefan Potgieter and Carel Jacobz added to the winning blows. Daniel Clifford halved against David Rynners to secure an 8 – 4 victory.

In the remaining matches, Boland beat Border 8 – 4 and Eastern Province took down Limpopo by the same margin.

Both leading teams will have a second round bye, leaving the way clear for third placed Eastern Province and fourth placed Boland to improve their rankings. EP play Border, while Boland will face off against Limpopo and Northern Cape.