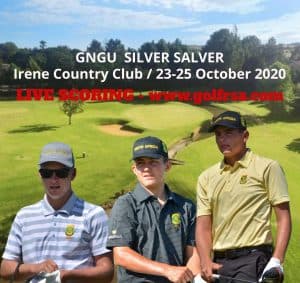 October 2020 – GolfRSA National Squad member Ryan van Velzen made picking a favourite to win the Silver Salver this weekend even tougher after the Benoni golfer became the seventh amateur to win on the Sunshine Big Easy Tour on Wednesday.

Van Velzen kept up the trend of strong performances by the squad members on the country’s feeder circuits in recent weeks with a maiden win at Services Golf Club.

The 2020 squad inductee followed in the footsteps of previous amateur winners Kyle McClatchie, Marco Steyn, Aubrey Beckley, Dylan Naidoo and Yurav Premlall, who became the youngest amateur champion at the age of 15 years, 10 months and 14 days with his two-shot triumph at Observatory Golf Club last year.

In February, Van Velzen had led a strong international field through the first two rounds of the African Amateur Stroke Play Championship.

Such was his dominance in the opening two rounds that he still shared the 54-hole lead at Leopard Creek in the individual 72-hole tournament despite a sextuple-bogey six on the par-three seventh and a third round score of 11-over 83. Sticking to an aggressive approach in the final round at Leopard Creek proved expensive, but the experience proved invaluable. This time around, Van Velzen changed tactics and opted for a more conservative style and got his just desserts.

“I played aggressively over the first two rounds, but I was more cautious on the last day,” said Van Velzen, who countered a lone bogey with four birdies. “I focussed on every shot, stayed patient and tried to keep the mistakes to a minimum. The strategy paid off.”

The Benoni Country Club member, who ranks ninth in the GolfRSA Open Amateur standings, hopes to profit from his winning form when he tees it up at Irene Country Club on Friday.

“To win on the Big Easy Tour was huge, because the guys chasing me were making loads of birdies and eagles. I really had to concentrate on playing my own game and shut out what was happening around me.

“I made the GolfRSA National Squad this year and I was so excited to be one of the players selected to compete in the Big Easy. It’s really great to walk away from the first one with the trophy. This weekend it is Gauteng North’s Silver Salver. It will be our first ranking event since golf basically shut down in March with the lockdown. Hopefully I can ride the confidence from this win to another strong result at Irene.”

Van Velzen will have to contend with in-form squad mates Christiaan Maas and South Africa’s leading amateur and defending champion Casey Jarvis – amongst others – when the Silver Salver tees off today.

Maas, who was also in contention in the Big Easy event, recently racked up four titles in as many weeks. The 17-year-old won twice on the IGT Challenge Tour – first edging out Jarvis at Services Golf Club, and then defeating professional Louis Albertse by 7 points in the Modified Stableford event to notch victory number two at The Els Club Copperleaf.

Maas then defeated Naidoo in a play-off at The Lake Club Benoni for his maiden Bushveld Tour win.

With the matric finals looming, Premlall has been hitting the books hard, but judging by his top fives in all four of his starts on the IGT Challenge Tour – including a runner-up finish at The Els Club Copperleaf – the Glendower golfer has maintained the form that landed him in the winner’s circle in the North West Open in March and propelled him to fourth in the Open Amateur rankings.

The Nelson Mandela University student heads the Eastern Province Order of Merit Race to 2021 after winning the EP Stroke Play and Match Play Championships, the Humewood Silver Salver and the Wedgewood Vase.

Follow the scoring from the prestigious Silver Salver at Irene Country Club on www.golfrsa.com or click HERE