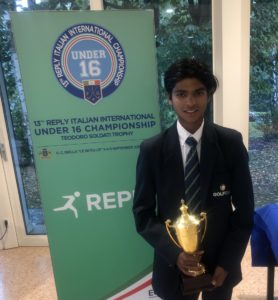 BIELLA, Italy (6 September 2019) – Amilkar Bhana chalked up another brilliant victory for the GolfRSA National Squad with a winning performance in the 13th Reply Italian International Under-16 Championship at the Golf Club Biella Le Betulle on Thursday.

The 14-year-old Gauteng golfer overturned a six-shot deficit in the third round to tie overnight pacesetter Ruben Lindsay from Scotland for the lead on four-under.

The pair were declared joint winners after the final round was cancelled due to failing light.

“We were still tied for the lead when we were called off due to a severe lightning storm in the area in the final round,” said Bhana. “We waited for about an hour and then they told us that we wouldn’t be able to complete the round and they declared a 54-hole result.”

Bhana is the third South African champion to lift the Teodoro Soldati Trophy after Haydn Porteous won in 2008 and Martin Vorster in 2017.

He is also the fourth junior this year to succeed on the international stage, following in the footsteps of East of Ireland Open Amateur champion Vorster, Tyran Snyders, who became the first South African champion of the Junior North and South and Jayden Schaper, the first winner of the Junior PLAYERS Championship.

“This was the first time that I represented the GolfRSA National Squad abroad and it’s a pretty great feeling to come home as an international winner,” the delighted Bhana said.

“We knew we were facing tough opposition with top juniors from 20 countries competing and a very challenging course. The tournament delivered on both counts and I’m really proud of the way I managed my game.

“The course is very tight and tree-lined and accuracy is key. You couldn’t just hit driver. You had to plan your shots to position yourself well just to make pars. The greens were fast and slopey, too.

“My strategy was to try and hit fairways and greens and to keep the bogeys off my card and my game plan paid off in the third round and final rounds. The reward was bringing home a trophy.” 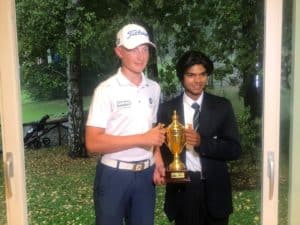 Lindsay set the 36-hole target on five-under with rounds of 72 and 69, while Bhana returned rounds of 74 and 73 to start moving day six shots off the pace. The 2019 Scottish Boys Amateur champion carded 74 to retain pole position on four-under, but he had to settle for a share of the lead as Bhana forced a two-way tie with a flawless five-under-par 68.

“I dropped seven shots on the first two days for rounds of 74 and 73, so I set myself a goal to play a flawless round to get myself into contention,” Bhana said.

“On the first hole, my approach shot hit a rake and bounced into the bunker. I made a great up-and-down to save par and that strengthened my mind-set.”

Bhana birdied the par four sixth and notched further gains at the eighth and ninth holes.

“I hit pitching-wedge right of the flag on six and holed a fast, downhill 10-footer for birdie. I drove it down the left on eight, pitched it five feet from the pin and boxed the putt. And on the par five, I laid up, leaving myself gap-wedge distance. I hit my third to two feet and holed the putt.”

The reigning Nomads SA Boys Under-15 champion turned three-under and made five straight pars before he picked up his next birdie at the par four 15th.

“I drove it down the right fairway to open up the green, because the pin was in front. I wanted to use the slope behind the flag and I pitched it perfectly. It rolled down to three feet and I holed the putt,” Bhana explained. “The par three (17th) was 6-iron distance and I left myself a 10 foot uphill, left to right putt. I paced it perfectly for my last birdie.

“In the final round I made a trio of birdies to move to seven-under and I had just hit my tee shot on 16 when the siren sounded. Ruben had eagled the 15th to get to seven-under. In the end, the result was very fair,” said the South African.

“I am incredibly grateful to GolfRSA for this opportunity and I learned so much from this tournament. I’m really proud that I could repay the trust they put in me. And I want to thank my team-mates and our managers for all their support and for helping me keep a positive mind-set and a great attitude, especially on the last day.”

First round leader Yurav Premlall (71-76-70) tied for fourth on two-under.

“Unfortunately Malan (Potgieter) missed the cut by four shots after rounds of 78 and 80, but he was out there on the final day, walking the course with our mascot, Bazooka the Bok, and championing his team-mates.

“Martin and I were really impressed by the spirit of this young group. For most of them it was their first trip abroad. They were perhaps a little too eager to do well and sometimes tried too hard, but they were always willing to listen and learn.

“Their discipline, behaviour on and off the course and dress code was exemplary. They were incredible ambassadors for South Africa and GolfRSA and the experience they gained this week will stand them in good stead in their future careers.”