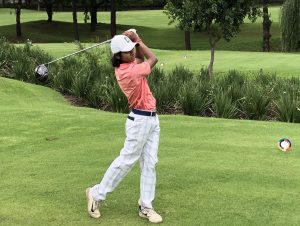 Amilkar Bhana in action during the first round of the Nomads SA Boys Under-15 Championship at Killarney Country Club; credit GolfRSA

3 January 2019 – For a second successive year, Amilkar Bhana laid down an early marker for success in the first Nomads SA Boys Championship of the season.

Bhana carded a three-under-par 67 at Killarney Country Club to race into the first round lead of the Nomads SA Boys Under-15 Championship on Thursday.

The 14-year-old from Country Club Johannesburg finished two shots clear of Southern Cape golfer Dylan Melville. He has a five-shot lead over Jaden Deltel from Bryanston and Jere Brits from Bellville Golf Club and is six shots clear of North West’s Stefano Marchetti, Tyron Groenveld from Ekurhuleni and Fabrizio de Abreu from Gauteng North, the 2018 Sun City Under-13 Challenge winner.

Bhana announced himself as one of the country’s blossoming young stars when he won the Nomads SA Boys Under-13 Championship and the Gowrie SA Under-15 Challenge two years ago.

Twelve months ago, Bhana was in early contention in the Nomads SA Boys at Kingswood Golf Estate, but he faded to a tie for ninth in the windy conditions in George.

The Central Gauteng junior spent the next couple of months sharpening his skills for coastal conditions and showed just how much he improved when he claimed a four-shot victory in the Dimension Data Junior Open Under-15 Challenge at the same venue in June.

Bhana backed up the trophy finish with four top six finishes – he took fourth in the Sun City Under-15 Challenge, tied for sixth in the Nomads North and South, was third in the Cape Town Junior Open and joint sixth in the Joburg Open – and led the SAGA Under-15 rankings at the end of the season.

Level after birdies at 13 and 15 and bogeys at 14 and 16, Bhana pulled away from the field with four birdies on the back nine, including three on the bounce from the fifth hole. A second Nomads SA Boys title is within reach, but he will have to keep the chasing pack at bay over the last 36 holes.

Eighth-ranked Melville from Oubaai overcame a double bogey at 14 with birdies at two and five and offset a late bogey at eight with a birdie at the last to finish in red numbers.

Deltel, second in the Under-15 rankings, played all his golf on a nine-hole course in the Seychelles until his family relocated to South Africa early last year.

The 14-year-old captured his first title on the SAGA junior circuit with victory in the Sun City Under-15 Challenge last July. A few months later he tied for 14th in the Boys 13 Age Group at the US Kids Teen World Championships at Pinehurst and in December, Deltel became the youngest winner of the Air Mauritius Trophy Open.

Beyond the top four there are a large number of top 20 ranked players primed to attack.

“We have a really strong turn-out for this year’s championship,” said David Younge from GolfRSA. “No less than 18 out of top 20 ranked Under-15 players, including the top six, teed it up and a good number of them are inside the top 20 after the first round.

“The players were more than a little nervous about the new rules, but Neil Homann from GolfRSA did a session with them after the practice round on the rules changes and there was great excitement this morning to get the 2019 season underway.

“It wasn’t much shorter than men’s club tees today, so a 67 from Amilkar is an excellent score. The course was still very wet after 80mm of rain over New Year and playing a lot longer than normal, so I compensated with a shorter set-up, but I tucked the pins to make it challenging.

“The greens are running at 10, so not too fast. The surfaces are excellent and the course was primed for good scoring. It was unusually cold this morning, with the mercury around the 15 degree mark and a club and a half wind, but it only lasted about an hour. The rest of the day it was in the mid-twenties and a half club wind kept things interesting.”