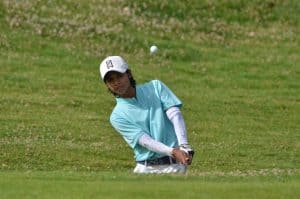 HOUGHTON, 4 January 2019 – Hannes Strooh and Michael Ferreira both matched Amilkar Bhana for the low round of the day, but neither player posed a threat to the first round pacesetter, who retained the lead in the Nomads SA Boys Under-15 Championship on Friday.

Fourteen-year-old Bhana from Country Club Johannesburg fired a four-under 67 for a two-shot cushion in the opening round at Killarney Country Club.

He burst from the blocks with a birdie-birdie start and although he gave three shots back to the field, Bhana was still firmly in the driver’s seat after carding an even-par 71.

Bhana, who won the Nomads SA Boys Under-13 Championship and the Gowrie SA Under-15 Challenge two years ago, is targeting his second SA Boys title and if he gets the putter going, the Central Gauteng junior will be tough to beat.

He moved to two-under 138 and will start the final round with a comfortable six-shot lead over Western Province’s Jere Brits.

Brits was solid with successive rounds of 72, but the Bridge Fund Managers Junior Series winner will know it could have been so much better. The Bellville junior birdied five, seven and 16, but was left to rue a bogey at 11 and double bogeys at two of the par threes – the fourth and the 17th.

Strooh from Randfontein Golf Club bookended his round of 71 with birdies at one and 18, but he too will be lamenting a double bogey at the second and back-to-back bogeys at 12 and 13.

Jaden Deltel from Bryanston and Dylan Mellville from Oubaai were both within striking distance of Bhana at the start of the second round, however a 74 from Deltel and 77 from Melville saw the pair slip to a tie for fourth on six-over.

Ferreira’s 71 boosted the Woodhill junior to seven-over and he shares sixth shot with Ockert Brits from Goldfields West and Jonathan Wilsenack from Kempton Park.

“The boys had a very cold start this morning and had to navigate a club and a half wind at this extremely tight layout, so it was a tough day at the office,” said David Younge.

“Due to all the rain over New Year, the greens are quite receptive. We tucked the pins in some tough places today to give these young lads a proper challenge and experience equal to what they would face abroad, though taking the age group and abilities into consideration.

“Amilkar as the number one ranked Under-15 junior has lived up to his billing and has a substantial lead on the field. He is on form, very motivated and consistent and he is very unemotional and methodical in the way he goes around the course. It’s going to be tough for the guys to catch him. But it’s great to see so many of our top ranked juniors inside the top 20 and some new faces, like Jere Brits and George Delport, coming through.”