On a sunny day, but in a gale force easterly wind, Bertine Strauss managed to keep ahead of Southbroom’s Tiffany Avern-Taplin to eventually win the championship 1up. “With Humewood’s fast running fairways and firm greens, course management played a vital role” said Eastern Cape President Ria Bestbier. Bertine played steady golf and was delighted to pick up the match play trophy after being joint runner-up in the stroke play championship on Monday. 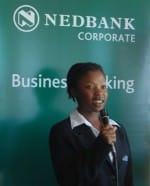 Young Ernie Els Foundation member Katlego Mhlambi has a good 3/2 win over Humewood Swallow Charlotte Humm. 16-year old Katlego, a member of Royal Johannesburg and Kensington Golf Club, joined the Foundation in 2008 but moved down to continue her schooling in George this year. This was a great win for her off her 12 handicap.

In the C Division, Jenny Ririe was 5 up after 9 but Humewood’s Sue Barton fought back bravely to lose 4/3 to her Warmer Golf Club opponent.