Bertine returns to represent SA after completion of her matric exams

Former top ranked SA golfer Bertine Strauss ends her school days tomorrow when she writes her final matric exam. She will join Tiffany Avern-Taplin in representing South Africa at the Mexican Women’s Amateur Championships and International Pairs Tournament to be played in Mexico City from 5 – 8 January 2011.

A top student, Bertine played in very few tournaments in 2010 in order to concentrate on obtaining the best result possible in her final year at school and was unavailable for WGSA selection. She hopes to attend a USA College from mid-2011.

Tiffany Avern-Taplin has climbed back up the WGSA ranking after returning from the USA a year ago and was part of the victorious SA team at the All Africa Challenge Trophy played in Abuja, Nigeria earlier this month. 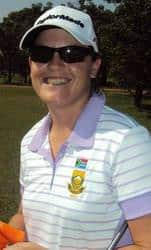 This is the second year that South Africa will be represented at the Mexican event – last January Iliska Verwey and Kim Williams made the trip, playing at the same venue as the coming tournament – the Club de Golf Vallescondido.

The players leave in 1 January and will be travelling without a manager.