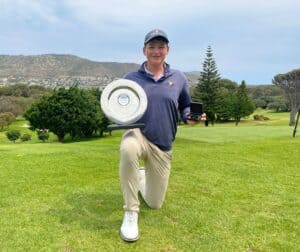 12 October 2022 – Former Nomads SA Boys U-17 champion Dan Bennett made a welcome return to the winner’s circle in the Cape Town Junior Open in October.

Just a week after finishing runner up in the Ekurhuleni Open, the KwaZulu-Natal golfer went one better and claimed a one-stroke victory in the 54-hole Sunshine Tour Series event at Clovelly Country Club.

The 17-year-old from Royal Durban fired rounds of 66, 75 and 70 to finish on five under par, two strokes clear of fellow GolfRSA National Squad member Jadel Deltel and Erinvale’s James Boustead.

Bennett fired seven birdies in a superb six-under 66 opening round to edge two strokes clear of Leopard Park’s Mjoalefa Nale in the morning, but an afternoon score of 75 saw him slip back into second, two behind Deltel and Pascal Gunther, also a national squad member.

“I started so well in the morning and was dropping a few putts but once the wind got up in the afternoon it was a lot harder and I got a few bad breaks along the way,” he explained.

With wind showing up early on the final day, Bennett navigated the outward loop with nine straight

“I just kept things solid on the front nine, knowing that everyone would be battling in the wind,” Bennett said. “I made a few good birdies on the start of the back nine, but unfortunately it wasn’t a great finish over the last three holes. I let a couple of shots slip, but at least I had done enough to finish in front.” 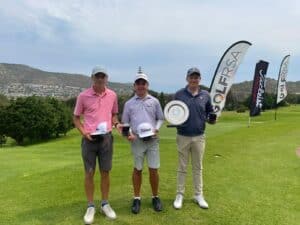 While he has collected some silverware on the KwaZulu-Natal Golf Union’s local circuit this season, it’s been exactly 12 months since the former GolfRSA No 1 junior celebrated a double victory at St Francis Links in the Dimension Data Junior Open U-19 and Nomads SA Boys Championship.

“It’s been a frustrating couple of months, because I have been playing so much better than my results reflected, but it’s finally all coming together and I’m just so happy to be back in the winners’ circle,” he said. “Now I just want to keep this momentum going for the rest of the season and hopefully, win a few more.”

Gunther finished alone in fourth, three shots off the pace.

Wedgewood’s Devon Valentine showed off his skills in the wind and had dipped to six-under through 16 holes, but the Eastern Province golfer was punished with a double bogey for an errant tee shot on the penultimate hole. A bogey on the last saw Valentine sign for a 69 that earned him a share of fifth on level par with Milnerton’s Jack buchanan and Country Club Johannesburg’s Amilkhar Bhana.