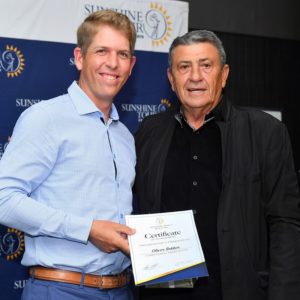 18 March 2018 – Oliver Bekker took home five awards, including the prestigious Commissioner’s Award at the Maslow Hotel where the Sunshine Tour and Golf RSA held their awards ceremony on Sunday.

Bekker, who won three times during the 2017-18 Sunshine Tour season, was recognised for his overall contribution to golf on the Tour in the citation for the Commissioner’s Award.

He also won the Gary Player Trophy for the best stroke average of players who played in 60 percent or more of the Sunshine Tour tournaments during the season. He averaged 70.21 over 71 rounds of tournament golf.

His fifth award was for his feats on the par-fives during the season, where he averaged 1.97 under par throughout his 24-tournament campaign.

The ceremony also saw Irishman Neil O’Briain being named the Rookie of the year to win the Bobby Locke Trophy, beating Zack Byrd of the United States in a race which went right down to the wire during the last event of the season.

Sunshine Tour Commissioner Selwyn Nathan said, “It’s always good to celebrate excellence, and we’ve had another good year on the Sunshine Tour. The commitment of the players is something which sets the Sunshine Tour apart, and it’s one of the reasons we consistently produce players who shine on the world stage. The season which has just ended reinforces that.

“We’re able to do what we do because of long-standing and fruitful relationships with our partners and sponsors. Without them, the success we are celebrating would not be possible, so excellence seems to be the least we can do to repay them.

“We also believe that if the season just finished was successful, things will get even better as we kick off the new season.”

Kyle McClatchie: Newcomer of the Year