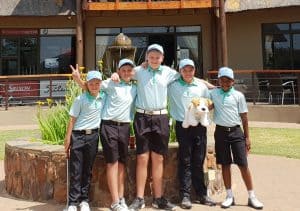 Despite being a man down, Gauteng North pushed their way into the lead on day two of the Nomads SA Under-13 Championship at Koro Creek Bushveld Golf Estate; credit GolfRSA.

MODIMOLLE, 4 October 2018 – An epic battle is on the cards in today’s final round of the Nomads SA Under-13 Championship today after Gauteng North and Western Province overhauled first round leaders North West in an action-packed second round.

North West raced to the top of the pile with an opening round of 388 and started the day with a five shot lead over the Daisies and seven shots clear of Province.

However, when the sun set at Koro Creek Bushveld Golf Estate, Gauteng North had pushed their way to the top and Western Province moved ahead of North West into second.

Batting with just five players after William Reyneke went down overnight with bronchitis, Gauteng North combined for 404 to top the standings on 797.

Fabrizio de Abreu set the Daisies on a winning course with a five-over-par 77, while Dujuan Snyman, Raymond van Niekerk, Vian Jansen van Vuuren and Zinan Maimane did the rest to give Gauteng North a shot at victory in the popular junior team competition.

“The heat on day one got to some of the players in the first round, but we were still nicely placed in second,” said team manager Morne Engelbrecht.

“Unfortunately William fell ill and we went into the second round knowing that we wouldn’t have the luxury of a sixth player. All five juniors knew that they had to do their bit for the team.

“We started rather shakily in a strong wind on a pretty dry golf course. The fairways are very firm, but thankfully the greens are quite receptive. Raymond boxed his final putt for birdie to put an 80 on the scoreboard for us.

“Fabrizio was pretty much going into every hazard at the start of the round and was four over after four holes, but he hung tough. He played the last nine holes in one-under to sign for a solid 77.

“Vian added an 82 and our youngest player Zinan overturned a struggling start when he chipped in from 66 metres for eagle two on the par four second. He contributed an 87.

“Our little star on the team, Dujuan, also kept it going despite a little bogey run in the middle of the round. He finished strong for a 78 that also landed him the lead in the Individual Competition.

“The team is in good spirits and excited for the final round challenge. The work isn’t done yet, but they are ready to take it to Western Province and North West today.”

The Daisies lead by nine shots from Western Province, who returned a team total of 411, while North West is a further 11 shots adrift after combining for a second round 429.

Rounds of 71 and 78 will see Snyman from Woodhill head into the final round one shot clear of Tyron Groenveld from Ekurhuleni and first round leader Janko van der Merwe from Mpumalanga. Team mate De Abreu and Marno Lange from Ekurhuleni are three off the pace in joint fourth.