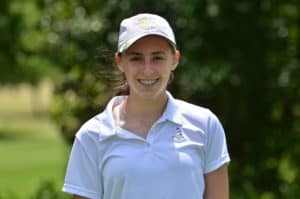 27 January 2020 – Benmore teenager Stephanie Barbaglia was in sizzling form as she beat a top-class field of golfers to become the first girl to win a Bridge Fund Managers Junior Series title this season.

Van Deventer, who plays out of Magaliespark Country Club, reeled in a trio of birdies over the closing holes to match Barbaglia’s clubhouse target of 69. The pair tied for first, one shot clear of Kiera Floyd from Ekurhuleni and Central Gauteng’s Nikhil Rama.

Between them, the foursome recorded a remarkable 22 birdies on the day.

“I wasn’t aware of all the birdies being made throughout the round,” said Barbaglia. “I just stayed focused on my golf and tried to shoot the best score I could.

“The key moments in my round were the final four holes of the front nine. I lost my swing a little bit and missed the greens and landed in bunkers on both the 6th and 7th holes. But I managed to get up and down both times, which helped with my score and my confidence. Then I made two birdies in a row, which made me believe that I could win the tournament.”

Stephanie will join all the #BridgeJuniorSeries tournament winners in the regional finals scheduled for April 2020 where the finalists will contest for the main prize – an all-expenses paid trip to compete in the prestigious North and South Junior Championship at Pinehurst, North Carolina which has hosted three US Opens, the PGA Championships and the Ryder Cup. 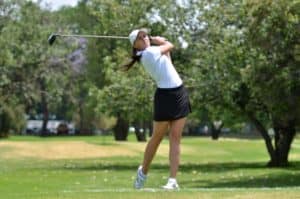 “I wasn’t aware that by winning you could have a chance to play in the USA,” Barbaglia said. “I found out just before the playoff when they were giving us the rules and explaining how we could stand a chance of playing in the USA. When I heard this it made me more motivated to win.”

Stephanie loves golf and her goals for 2020 are to reach the top 10 in the GolfRSA Women’s Open Amateur Rankings and break into the top 5 of the Junior standings.

“I love golf because it’s a sport you can play all your life and it offers opportunity to get into a top university and to travel the world.  Long term I hope to get into a college in America, then earn my LPGA tour card and become one of the best female golfers of all time for South Africa,” she said.

Barbaglia is the third female finalist after Floyd, who triumphed on the 2019 series at Royal Johannesburg and Kensington, and former SA Women’s Amateur champion Jordan Rothman, who won a three-way play-off at Durbanville Golf Club last year.

“Stephanie’s display during the round and in the tense playoff was exceptional, especially when you consider she is just 14 years of age,” said Paul Stewart, Chief Executive at Bridge Fund Managers. “The boys who have already qualified for the regional final are going to have to watch out for this talented and goal-driven youngster.”

The #BridgeJuniorSeries launched in 2017 and is managed by the South African Golf Development Board (SAGDB). Endorsed by GolfRSA, the series of 18 tournaments are hosted by leading courses countrywide and is open to boys and girls in two categories – Under-13 and Under-19. TaylorMade South Africa has sponsored all the prizes since the series launched.

Only the Under-19 division finalists are eligible to contest for the two spots in the 2020 North and South Junior Championship.

Golfers in the north will have two more opportunities to qualify for the North Regional Final at Wingate Park Country Club on March 1 and State Mines Country Club on 8 March 2020.

Written by Doug Carew (Splash PR) and edited by Lali Stander on behalf of GolfRSA and the South African Golf Development Board.