One of the most pleasing aspects of the Sanlam Cancer Challenge is how it is a tournament for golfers of all abilities, even in the National Finals, but there are also the notable players whose ability extends well beyond the amateur level.

Former Sunshine Tour professional Schalk van der Merwe, playing out of Gobabis Golf Club in Namibia, was the runner-up last year after leading at the halfway mark, and this year it was an aspirant Sunshine Tour pro who shared the lead after the first round played on Monday at the Lost City Golf Course at Sun City.

Alex Pieterse, a 22-year-old from Volksrust Golf Club in Mpumalanga, shot a gross 69 for 36 points to claim the early lead in the Men’s A Division. For the +1 handicapper, it was his first taste of the Sanlam Cancer Challenge National Finals and he believes it will certainly help him as far as his greater golfing ambitions go.

“I’m very impressed, it’s a great tournament, the course was in great condition, and Sanlam Cancer Challenge are doing a huge job in the fight against cancer. It’s also good to be here because later this year I’m going to go to Q-School again and try to make my Sunshine Tour card, I’m sure being here will help,” Pieterse said.

The highlight of his round was an eagle-three at the par-five seventh hole. 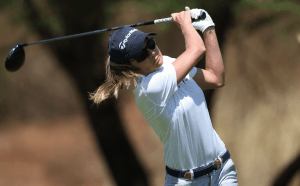 Adri Pienaar during the first round of the 2018 Sanlam Cancer Challenge Finals held at The Lost City Golf Course at Sun City this week.

“I hit a great drive straight down the middle and 205 metres to the flag. I was between clubs and I decided to hit a six-iron, it finished 25 feet from the pin and I read the putt perfectly,” Pieterse beamed.

Some excellent golf in the late afternoon from Clifford Gous of Kempton Park Country Club and Hendrik Kriek of Mossel Bay Golf Club ensured that Pieterse will go into the final round, that will be played on the Gary Player Country Club course on Tuesday, with only a share of the lead.

It looked for a long time that it would be a double celebration for the greater Pieterse clan as Sanet Pieterse from Queenstown Golf Club finished with 39 points and led the Women’s A Division for most of the day.

But Adri Pienaar of Omeya Golf Club ensured that Namibia would once again be represented at the top of the leaderboard after the first round of the Sanlam Cancer Challenge as she produced a very solid round of golf that included 11 pars to snatch the lead late in the day with 40 points.

You can follow live scoring at the Sanlam Cancer Challenge National Final here.