Playing off an 11 handicap, the Boland player scored an amazing 80 points, 40 on each day, to pick up the A Division Trophy, 13 points ahead of 14 year-old Rochelle Brooks (6) of Walker Park, Mpumalanga.

Anneke’s 13-year old daughter, after only playing golf for one year, won the Bronze Division of the Boland Championship earlier this month and perhaps both wins can be attributed to the pair playing at least 18 holes together every day of the recent school holiday.

WGSA Vice-President welcomed the players at a function on the first evening, thanking Sanlam’s Nandi Scorer and Gary van Loggerenberg for the fantastic effort every year in raising over a million rand in aid of the Cancer Association of South Africa – money spent on cancer prevention and patient care services.

Sanlam is the chief sponsor of amateur golf in South Africa through the annual Sanlam Cancer Challenge, the largest amateur golf tournament in Africa and one of the longest-standing sport sponsorships in the country.

Hillside Golf Club member Jeanne Rynners, playing off a 23 handicap, won the B Division with 73 points (31, 42) ahead of Koro Creek’s Lynette Smith on 68 (35, 33). Jeanne was also the runner-up in the overall Women’s Championship. 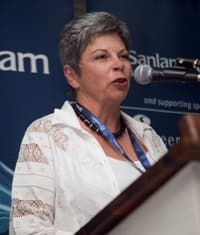