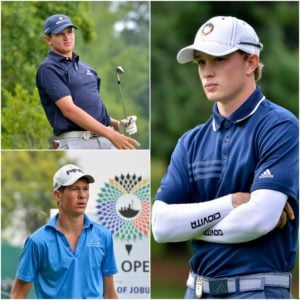 10 January 2019 – History beckons at Randpark Golf Club this weekend for the final two rounds of the R17,5-million South African Open, hosted by the City of Joburg.

It has been 61 long years since an amateur won the world’s second oldest title, and that honour belonged to Denis Hutchinson way back in 1959.

So actually – in terms of the way golf has developed over the decades – one could say that “ancient history” is beckoning because GolfRSA whiz kid Jayden Schaper is tantalizingly close.

The 18-year-old South African Nr 1 is on 10-under-par 132 in this year’s championship following a superb 65 on the par-71 Bushwillow course on Thursday and an equally fine four-under-par 67 on Friday on the Firethorn course.

For Schaper to be in the chasing pack alongside England’s Sam Horsfield (68) and fellow South Africans Jaco Ahlers (66), Trevor Fisher Junior (67) and Thriston Lawrence (65), just one shot back from Finland’s Tapio Pulkkanen, is a massive story in golfing terms.

When asked if he will be nervous going into the final two rounds, Schaper replied: “The way I see it, it’s the same golf course. It’s the same 14 clubs. I’ll treat it as any amateur event I’ve played in. There will be a bit of nerves, but I kind of enjoy that. I’m just looking forward to the weekend.

“Yes, the field is a stronger one than I’m used to, but I’m not worried about the other players, I’m just out to play my own game.” 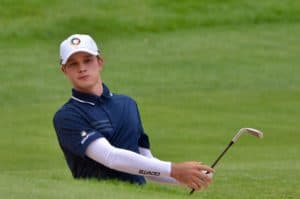 GolfRSA No 1 Jayden Schaper in action during the second round of the SA Open, hosted by the City of Joburg, at Randpark Golf Club; credit Ernest Blignault.

Schaper turned one-over after following a birdie on the sixth with successive drops, but he fought his way past playing partner and defending champion Louis Oosthuizen with five birdies down the inward loop.

”I trusted my guts out there today and finished well. It would be pretty special to match what Mr Hutchinson did. I’m just going to take it one shot at a time. If the opportunity comes, I’ll try my best to take it,” said reigning SA Stroke Play champion, who won the Junior Players Championship in America, considered the most prestigious junior tournament in the world.

Defending champion and tournament host Oosthuizen described Schaper’s golf over the first two days as “brilliant” while calling his own game Friday “frustrating”.

“I hit the ball from tee to green as well as I can but the putts just wouldn’t drop,” said Oosthuizen, who is packed in a big group on eight-under, including George Coetzee and former Freddie Tait Cup winner Branden Grace.. 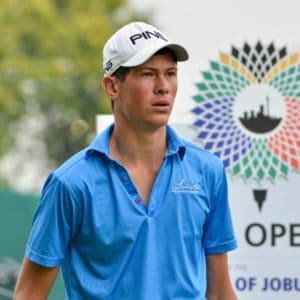 Southern Cape’s Lamprecht got it to seven-under through 14 holes on Firethorn on Friday before the Louis Oosthuizen Golf Academy player suffered three late bogeys. “I didn’t play competitive golf for the last six months of last year to focus on my matric examinations, so I did feel a little rusty on day one,” said Lamprecht, whose sacrifice netted him seven distinctions and a golf scholarship to George Tech later this year.

“Today I felt calmer; more in control of my game and I managed my game much better. I wanted to shoot seven birdies, but I misjudged the wind on the closing holes. I left myself in a few impossible lies. But I’m still pleased with the round and really happy to be playing this weekend.”

Jarvis opened with a tidy four-under 68 on the Firethorn, but turned four-over after a triple bogey at the ninth. The State Mines golfer rallied with an eagle and three birdies on the inward nine on Bushwillow to make the weekend. 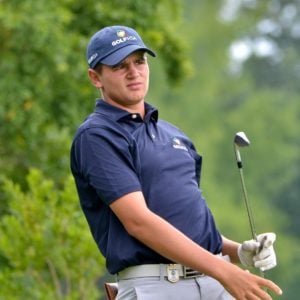 “I thought my campaign was over after I hit it into the trees on 10, but I chipped in to save par and I holed a five-footer on 11 that just got the energy going again,” Jarvis said. “I was nervous this morning, but now that I’ve made it to the weekend, I’m just going to go out there to enjoy the rest of the tournament.”

Oosthuizen is packed in a group on eight-under 134 alongside former and one of no less than 22 players within three shots of the Finn.

The scene is set for what is certain to be a thrilling weekend of golf and Sunday could just see “ancient history” being made if Schaper wins.

One man who would be only too glad to see his record finally fall would be that now old campaigner-turned voice of golf Denis Hutchinson. And wouldn’t it be special if it happened on the day that “Hutchie” – as we all know him and love him – does his final golf broadcast at Randpark.

Written by Grant Winter and Lali Stander on behalf of GolfRSA.