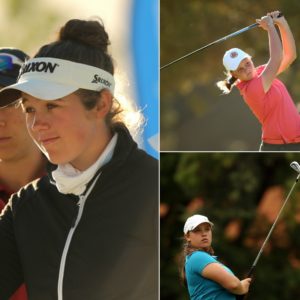 Like most of the field on opening day, top ranked Du Toit found the going very tough.

However, the 18-year-old was reasonably chuffed with a two-over-par 74 return after learning that just one player in the 78-strong international field broke par at her home course.

Du Toit will start the second round in a tie for 11th with big-hitting Bonita Bredenhann from Namibia, England’s Rachael Goodall, local pro Francesca Cuturi and fellow amateurs Casandra Hall from Ekurhuleni and Brittney-Fay Berger from KwaZulu-Natal.

“It’s such a privilege to have this tournament right here on my doorstep and to have the chance to play with top international professionals,” she said.

“This course is always very tight and the greens are a lot faster than normal. It’s not the kind of course where you can just let rip with the driver. You have to keep it in play and avoid the 80-plus pot-bunkers.”

Du Toit won the 2017 All India Ladies Amateur Championship at the Eagleton Golf Resort in Bangalore in December barely three weeks after she sat her matric exams at Menlo Park High School.

With five distinctions to her name, Du Toit will be heading to Indiana in the United States later this year where she will be taking up a golf scholarship at the University of Perdue. But first, she has some lofty goals to pursue here at home.

“I would like to win a one or two of our provincial events to build up for the Sanlam SA Women’s Stroke Play, so it’s “It’s such a great opportunity to play on the Sunshine Ladies Tour to gain experience that I can take into the amateur events before I leave,” said Du Toit

Floyd, who currently sits in sixth on the WGSA Junior Rankings, was three under through six holes, but turned one-under after a trio of bogeys from the 15th. Two bad holes on her back nine saw the Ekurhuleni golfer home in 78 strokes.

“I was a little mad with myself for letting it slip, but this is all new to me and it’s a steep learning curve,” said the Grant Veentra Academy player. “I had a double at the first and tripled the last and without those two holes, it could have been a 73.

“This course punishes bad course management, so I’ll try to take a more conservative approach in the second round and plan my shots better. Hopefully I’ll improve enough to make the cut.”

Gabbi Venter, the cousin of Springbok centre Francois Venter, is the second youngest starter in the field and just five months older than Floyd.

The teenager opened with a 10-over 82 at the tree-lined Waterkloof layout in her Sunshine Ladies Tour debut.

Dad Kosie, a former top Free State cricketer, was on the bag and give Venter a lot of positive reinforcement. Not surprisingly, the grade eight UNISI Girls High School scholar was not in the least disappointed.

“For me this week is all about gaining experience and improving my course management skills,” said the Quintin Williams Golf Academy player. “It was really cool to play with Francesca (Cuturi), because she handles herself really well on the course. It was an eye-opener to see how the pros approach the greens and plan their way around this course. The pins were tucked and the greens are small, so they tee shot was really important.”