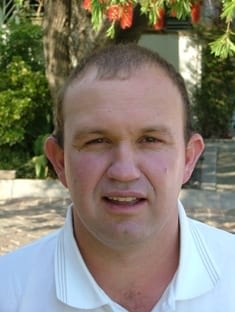 Conrad Amm recorded a second consecutive one under par 71 which gave him a two under par 142, after 36 holes, to take a one shot lead at the halfway stage of the 72 hole 2009 South African Mid Amateur Stroke Play Championship being staged at the De Zalze Golf Club, outside Stellenbosch.

One shot adrift are Neil Homann (70) and Steve Williams (75), both on 143, one under par. The former is a former SA Amateur Stroke Play Champion and the latter was recently selected to represent South Africa in a test match against France.

Overnight leader Brian October played thirteen more shots than he did yesterday. He is now five shots off the pace on 147.

The cut was set at 160, fourteen over par. 67 players qualify to play in the final two rounds which take place on Thursday and Friday. The leaders tee off at 11h40 tomorrow.

A surprise amongst the players on the cut score is that of Jock Wellington, from Kyalami Country Club in Central Gauteng, one of the players expected to excel this week. At 18 shots off the pace, with 36 holes to play, it is unlikely he will make any impression on the leaders by the end of the final round.

Leaders after 2nd Round:
De Zalze G.C. Par 72 (36 hole – 144)
Players’ provincial union is recorded in brackets after their name.