The cream of South Africa’s amateur golfing crop will tee it up in the revamped 2019 South African Open Championship in December, looking to build on the positive results achieved in the 2018 tournament.

In January this year Kyle McClatchie claimed the Freddie Tait Trophy after delivering a remarkably mature performance for rounds of 68, 71, 68 and 71 and an impressive top-15 finish on a 10-under-par 278. Fellow GolfRSA National Squad members Matt Saulez and Garrick Higgo made it a trio of amateurs to progress past the halfway cut in the world’s second-oldest championship.

McClatchie has since embarked upon a professional career on the Sunshine Tour, but a group of five amateurs, announced recently by the South African Golf Association, will be looking to etch their name on the coveted trophy.

“The SA Open is the ultimate event for South African golfers and we are delighted to offer our amateurs the opportunity to test themselves in a championship of this stature,” said SAGA president Geoff Taylor.

“The five amateurs selected to represent GolfRSA have all worked extremely hard and achieved excellent results throughout the year, both locally and internationally. I look forward to seeing if they can match or improve on the strong results that last year’s players attained.”

The 2019 edition of the SA Open will take place on Randpark Golf Club’s two championship courses from 6–9 December 2018 and has a new sponsor in the City of Johannesburg.

The field of 240 players, including top South African professionals Louis Oosthuizen, Branden Grace, Charl Schwartzel, Brandon Stone and tournament host Ernie Els, will compete for R17.5 million in prize money. The championship will, for the first time in its history, be a tri-sanctioned championship between the Sunshine Tour, European Tour and Asian Tour, and as an added incentive, the top three non-exempt players will qualify for the Open Championship at Royal Portrush in 2019.

All five amateurs are part of GolfRSA’s National Squad and have represented South Africa during the year. 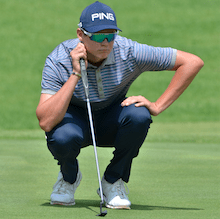 Nienaber, a grade 12 pupil at Grey College, rocketed to No 1 in South Africa at the beginning of 2018 following 11 wins over a 12-month period. Despite a reduced playing schedule to accommodate his studies, the 18-year-old added victories in the Western Province Amateur (Stroke Play and Match Play), and impressed in the National Squad’s UK Tour where he won the British Amateur Stroke Play Qualifier, lost in a playoff in the Brabazon Trophy and represented South Africa in the Eisenhower Trophy.

Saulez, who is South Africa’s No 2-ranked player, played alongside Nienaber in the Eisenhower Trophy in Ireland. The 21-year-old from KwaZulu-Natal had a remarkably consistent year, with nine top-10 finishes, including a runner-up result in the South African Stroke Play Championship.

Rebula, captain of South Africa’s Eisenhower Trophy team, became the first South African in 52 years to win the Amateur Championship when he triumphed at Royal Aberdeen in June. The 21-year-old is currently the highest ranked South African in the World Amateur Golf Ranking, at 63rd.

Lamprecht, the 2017 SA Amateur champion, rose to third in the SAGA rankings on the back of five top-five finishes in 2018. He recorded his first international victory, the East of Ireland Championship, this year and the country’s No 2-ranked junior will be playing in his second SA Open.

Germishuys qualified for the SA Open as the winner of the 2018 Sanlam SA Amateur Championship. The 19-year-old defeated Chris Woollam on the 39th hole of a tightly contested final at Durban Country Club. He notched up six further top 10s in 2018.

While there is no prizemoney on offer for the amateurs, the leading player who advances past the 36-hole cut will be awarded the Freddie Tait Trophy, following in the footsteps of some big names in the world of golf, including recent Major champions Trevor Immelman and Charl Schwartzel, European Tour winners Hennie Otto, Branden Grace, Dylan Frittelli and Brandon Stone, as well as multiple Sunshine Tour winners Jean Hugo, Jake Roos and Peter Karmis.

No fewer than 13 Freddie Tait Cup winners have gone on to win the SA Open.

“The SA Open provides a wonderful platform for these talented young players to gain invaluable experience and measure their progress in a top-flight golf tournament against top professionals,” explained GolfRSA CEO Grant Hepburn.

“All five amateurs have wonderful physical ability and talent, so the opportunity to learn from the best and the experience of competing at the highest level will serve them well in the future, both as amateurs or if they choose to carve out a future as a professional golfer.

“I have been so impressed by their work ethic and eagerness to learn and I have no doubt that they will represent South Africa and GolfRSA with pride.”