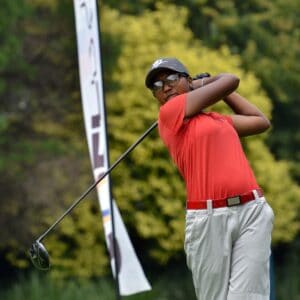 7 October 2021 – Three teams still have a realistic chance of lifting the 60th SA Women’s Inter-Provincial title at Rondebosch Golf Club, as the final round of competition looms on Friday.

Western Province are in pole position to claim the win on home soil after they edged defending champions Ekurhuleni in a tightly contested second-round match.

However, with Gauteng having racked up a big win against Gauteng North, they are within touching distance of the hosts. The two teams will meet in the final round, where a win for Province will ensure that they will be champions.

Should Gauteng win, however, and Ekurhuleni beat Gauteng North – as they are expected to do – then it will come down to points to decide the 2021 IPT champions.

With both Western Province and Ekurhuleni having won their opening fixtures, the top match looked very much like a title decider, and it certainly delivered on expectations despite the strong winds that hit the Cape Town course.

Province took the early advantage in the foursomes.

Zara le Keur holed a big putt to secure their first point, before Bobbi Brown teamed up with Isabella van Rooyed for a 1-up win against Nicole Strydom and Kayla Boshof. But in the final match, the powerful Ekurhuleni duo of Kiera Floyd and Kyra van Kan ran out 3 & 1 winners over Vicki Traut and Anita Chen.

The pivotal match turned out to be the first game out, with the home side’s youngest player Erica Chen. In the end, a fine par on the long par-four 18th was enough for the 15-year-old to defeat 17-year-old Tayla Howroyd 1-up and with it, clinch victory for the Western Province team.

Western Province captain Vicki Traut was delighted with the performance of her charges, and particularly singled out the two rookies on the team.

“It’s fantastic to see how everyone is pulling their weight this week,” she said. “I was so impressed with our two rookies today. Zara holed a great putt to put us ahead in the foursomes, and Erica nailed a pressure putt to get us the 5 – 4 win.

“It was so important for us to get the win today, to keep the momentum going. Playing Gauteng is never easy, even on home soil, but we are feeling confident. We won’t let our guard down for a second – we are going for the win.”

Gauteng, meanwhile, comfortably routed neighbours Gauteng North 7.5 – 1.5 to keep themselves firmly in the race for the IPT title.

Dominant from the start, Turgut and Cara Ford trounced Zane Kleynhans and Heidi van der Berg 8 & 7, Kera Healey and Samantha Whateley beat Larissa du Preez and Holly Lau 5 & 4 and Marine Legentil and Stephanie Barbaglia make a clean sweep of the morning foursomes with a 1-up win.

In the singles, only Du Preez managed to put a point on the board for Gauteng North, and the Daisies are bound to come under more fire from Ekurhuleni on the final day.

In the bottom half of the A Section, Southern Cape notched their second straight win when they beat KwaZulu-Natal 6.5 – 2.5, while Boland edged Mpumalanga 5 – 4 in the other match. 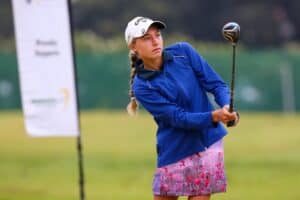 B-SECTION
Border stepped up their quest for promotion with a second straight win and now need only to win their match against Free State to secure their spot in the A-Division next year.

Having squared the morning session against North West, Sanet Pieterse, Kesha Louw and Demi Flanagan racked up 3 points with 4 & 3 wins to finish off their opponents 4 – 2.

“It was pretty tough out there, but we live to play in the wind, so today the conditions were definitely in our favour,” said Flanagan, who also captained Border to victory in the B-Section of the WGSA 72-hole Teams Championship at Kingswood earlier this year.

“Free State had a tough day against Eastern Province, losing 1.5 – 4.5, so we expect them to come at us guns blazing in the final round. Our strategy will be exactly the same – take it one shot at a time and remember to have some fun.”

In the bottom draw, Western Province B defeated Northern Cape 5.5 – 0.5 and Mpumalanga B beat Limpopo 4-2.

Eastern Province will face North West on D-Day, while Western Province B and Mpumalanga B face off and Northern Cape and Limpopo go head-to-head.