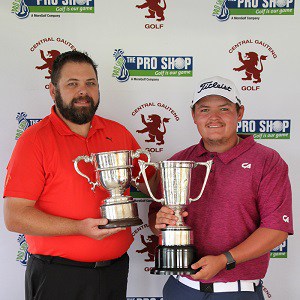 15 March 2018 – There can be few finer ways to seal a victory than with a flawless performance and that was exactly how in-form Louis Albertse won the 72-hole stroke play qualifier of the prestigious Pro Shop Northern Amateur Championship on 13 March.

The 21-year-old Dundee native was in imperious form all week at the Bushwillow Course at Randpark Golf Club.

Albertse was at slightly under the radar with much of the focus ahead of the event on Matt Saulez and Malcolm Mitchell – respectively second and third on the South African Golf Association Open Amateur standings.

However, recent form suggested the Rustenburg golfer was heading for success.

Having broken through for a maiden provincial title in the Mpumalanga Open last September, he made a strong start to the 2018 season with a sixth place finish in the Free State Open and eighth in the Gauteng North Open. Ties for sixth in the South African Stroke Play and African Amateur Stroke Play Championships followed and he paid a second visit to the winner’s circle on the IGT Challenge Tour in February.

Saulez didn’t disappoint and the Durban Country Club golfer shot to the top of the pile at Randpark with a 66 to share pole position with Andrew Carlsson from Bryanston.

Albertse was just a shot back in joint third, but he fired a second round 68 to move to 11-under 135 and retained the lead at 13-under 203 after posting another 68 in the third round.

He headed in to the final round with a one shot advantage over Luke Mayo from Mount Edgecombe and Stellenbosch amateur Hennie O’Kennedy and produced an outstanding closing display to clinch his second provincial title.

The HPC Tuks Golf Academy player got off to a flying start.

Disappointed after a first round exit in the match play stage, Albertse said that the victory delivered the kind of confidence that will see him double down on his effort to a Sunshine Tour card at next week’s Qualifying School at Randpark.

“I was still conflicted about Q-School at the end of last year, but I made up my mind that I was going to turn pro at the start of the season,” said Albertse, who rose to seventh in the Open Amateur Rankings following the win.

“It was a long journey to this point and it came with a lot of sacrifice, set-backs, highlights and hard work, but this victory really has put me in the right mind-set for the challenge ahead. I qualified for the Final Stage with a top 10 finish in the IGT Challenge Tour Race to Q-School Order of Merit, but it was very important to me to tee it up in the Northern Amateur. It’s one of the most prestigious amateur events on our calendar and it represented that last push to prepare for the step up to the pro ranks.

“I really couldn’t have asked for a better result. I don’t mean the win itself, but the way in which I won this time. In both the Mpumalanga Open and the Northern Amateur, I had players around me and I had to fight, but this time I loved the challenge.

“I had a much more mature attitude on the course. I was aware the whole time what was going on and what I needed to do. I never got ahead of myself. I played with Matt in the final round and I kept an eye on what Luca was doing. I couldn’t underestimate them, and I was in the present all the time.

“I made calculated decisions and I executed them well and I didn’t let my emotions get in the way. It was all about the shot at hand. Everything I learned and experienced on IGT Challenge Tour, in the premier events on the amateur circuit and in the SA Open came together in this tournament.

“I know that Qualifying School is going to be tough and mentally exhausting, but this win has given me that final bit of confidence to face it head-on. I’m totally ready for the challenge.”

Mayo, meanwhile, followed an opening 70 with back-to-back 67s and sealed second on 269 with a final round 65.