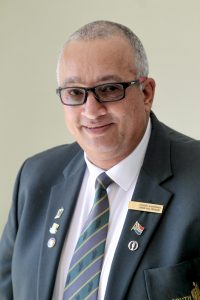 Agherdien, who took office on 20 February and will serve two years in terms of the SAGA Constitution, has been at the coalface of sports administration for almost 40 years.

We sat down with the new SAGA President during the recent South African Amateur Championship to learn more about his involvement with golf, his life away from the golf course and the legacy he hopes to leave at the end of his term.

Please tell us a little about how and where you began playing golf.
I started playing golf in 1997 after a need to find a “safer” sport to be involved with. I was a rugby referee for 15 years and it became life-threatening at times, hence the switch.

I joined the Mountview Golf Society, who played their golf at clubs all around Cape Town and this society was adopted by Parow Golf Club in 2003 and I have been there ever since.

I was a WP Nomad between 2007 and 2014 but juggling between my day-job and serving the sport at national level made it impossible for me do justice to the Nomads membership.

Besides golf, tell us more about your life?
I was born in Port Elizabeth and moved to Cape Town with my family at the tender age of 14. I have been in the field of Information Technology for all of my working life, having started as a computer programmer in 1981.

Today I am the Head of IT Governance, Risk, Security and Compliance at Sanlam.

I have two children aged 34 and 32 and a granddaughter aged 7. My wife Yumna is a keen social golfer and has been my rock of support throughout the journey till now. I cannot discuss my life without mentioning the profound positive influence that my mother had on it. For that I am eternally grateful.

I lecture part time at various tertiary institutions, post graduate management courses namely Project Management, e-Commerce and Software Architecture. I am passionate about giving back to the community and serve on the Board of the Beit-ul-Aman Frail Care Centre since 2007.

Please tell us more about your history in sport administration before your involvement with golf.
I was a Club Rugby administrator in Cape Town during the 80’s for 12 years and served as Secretary of the Western Province Rugby Union for four years just prior to unification in the early 90’s.

I had a stint as a cricket umpire for three years before switching to rugby refereeing for 15 years. My late father, Yunus, was a journalist and also keen sports administrator in the SACOS fold up until his passing in 1979.

My life mentor was my more renowned uncle Gamat Agherdien, who was a National rugby player and coach and excelled at all levels in numerous other sports including soccer, baseball, swimming, lifesaving and cricket. His life is currently heralded in the South End Museum in Port Elizabeth.

Where did your journey into the administration of the game begin, and how did you end up holding the most important post in amateur golf?
I was elected onto Parow Golf Club’s Committee in 2005 and eventually served as the club’s vice-Captain, Captain and President between 2008 and 2013.

Enver has been an inspirational influence on my administrative abilities and I am indeed grateful for our strong friendship today. Serving on the Board of GolfRSA for the past three years under the Chairmanship of Mr Johann Rupert has been quite an enriching and fulfilling experience.

In 2017, I was bestowed the honour of appointment onto the Board of the African Golf Confederation as one of the two Vice-Presidents for the continent.

What goals have you set yourself for your tenure as President?
For me it will be all about the continuation of the good work of my predecessors. It will also be about getting back to basics and removing complexity from the amateur golfing landscape.

Ensuring good feedback and communication with our stakeholders will be key for the success of SAGA. Good corporate governance and alignment with good global practice will be a non-negotiable for me.

Looking forward to the next two years, what will SAGA’s strategic priorities be?
A lot lies ahead on our strategic horizon. We will have to work hard to ensure that affiliation to SAGA offers relevant and noticeable value to enable the increase of the golf club membership base.

We will consider restructuring the prevailing financial model and establish a viable strategy to deal with our fund reserves. SAGA will also revisit the tournament landscape with the aim to add value and relevance to the competitive golfer base.

We will also build further on the relationship between the SAGA National Executive Committee and the GolfRSA Board.

Finally, we will execute on the intent of our transformation charter and closely monitor progress to ensure that we do not falter on this imperative.

If you could do anything differently what would that be?
I think it is our speed of delivery that bothers me most. We need to be more agile as an organisation and be more responsive to the needs of our constituents.

“Bad news early” and “fail fast” are two philosophies in business that if applied, will hold us in good stead. With due credit to the initiatives to improve communication to SAGA’s stakeholders, I believe that we have missed some opportunities in the digital space and a concerted focus on digital transformation could have made a big difference.

It is however not too late to shift gears and I hope to be influential in this regard.