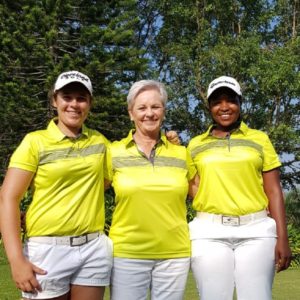 20 December 2017 – Gauteng North’s Danielle du Toit sealed a spot in the match play stage of the All India Ladies Amateur Championship, but Zethu Myeki from Border was forced to make an early exit in Bangalore, India on Wednesday.

“The roles were reversed 12 months ago, when Zethu reached the second round of the knock out stages, while Danielle made the early exit in the 36-hole qualifier,” said Womens Golf South Africa President Sally Greasley.

“This time around, Danielle followed a three-over-par 75 opening round with an even-par 72 to take sole fifth on 147, four strokes behind the winner, Nayanika Sanga from Maharashtra, India. Zethu improved four shots on her opening 81, but she finished on the cut-line and lost out in the six-way play-off for the last four spots.”

Du Toit offset three bogeys with a trio of birdies on the front nine at the Eagleton Golf Resort course and lost the advantage of a fourth gain at the par-four 14th when she dropped a shot at the penultimate hole.

“Danielle drove the bunker on the first, but hit a good trap shot and a great chip to save par,” said Greasley. “Her tee shot veered left at the second, but she made another great chip and left herself an easy birdie putt.

“She made another great up-and-down from the bunker at the short third for par, also parred the fourth but at the second par-three, she had a change of mind with her club selection and ended up in the bunker. She left herself a very long par putt and dropped a shot to move back to level.

“She hit two great shots at the sixth and chipped it close for birdie. At the seventh, she hit a superb drive and put her approach close for another birdie. Unfortunately she missed another long par putt at the eighth and failed to save par at the ninth, which left her level at the turn.

“She started the back nine with four straight pars and birdied 15 to go one under, but the 17th tripped her up again. It’s a par three over water with a carry of 136 metres and she found the water off the tee. She hit her drop ball long over the pin, leaving herself a tricky and long downhill putt. She took her time, and rolled the ball nicely down the slope into the hole for a four to go back to level par.”

The 18-year-old Pretoria Country Club player was over the moon after a par at 18 to finish sealed her start in the match play.

“I’m absolutely delighted with my game,” she said. “I played steadily and it was just such a pity that I cancelled four birdies with four bogeys. I am really excited to start the match play, because this course will be great for the format. It’s not particularly long, but it is very tricky.”

Myeki wrestled a balky putter on day one and although her putting improved, she dropped too many shots around 5,670 metre layout. The GolfRSA Elite Squad player joined five other players on 158 and had to battle her competitors for one the last four spots into the 32-strong match play field.

“Zethu had a better day with one birdie on her card,” said Greasley. “She putted better and made several par-saving up and downs, but she just had one too many bogeys.

“The play-off last four holes. The six girls set off at the par-five first and three girls grabbed the first three spots with birdies. With one spot to play for, Zethu and the rest played the par-four ninth next and one girl fell out with a bogey.

“Zethu and the remaining girl played the first again and both players made par. They went down the ninth again. Their tee shots were equal distance, so the other hit first and found the green, although she left herself a pretty long putt. Zethu caught on the up-slope of the bunker and after a poor chip, she missed the par putt. The other player made her par-putt and that was it for Zethu.

“I am very disappointed for Zethu, but this just wasn’t her week. Her 81 on day one left her an uphill battle in the final round. She was unfortunate to miss the cut by just one shot.”

Myeki was very magnanimous in defeat.

“I played my best golf today, but my best was just not good enough,” said the Ernie Els and Fancourt Foundation golfer. “You know, I am disappointed, but it is what it is. I’ll be out there tomorrow, giving Danielle the support she gave me last year.”