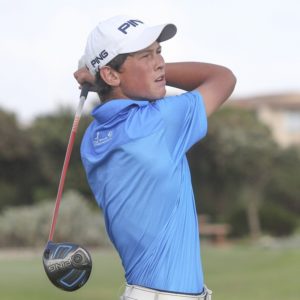 9 October 2017 – Just a few days on home soil after his successful debut in the Junior Presidents Cup, Christo Lamprecht made the trip from George to challenge for the Lion of Africa Junior Open title in Cape Town.

Over the two rounds on Sunday at Clovelly Country Club, the reigning Sanlam SA Amateur champion was in solid form. He interrupted a run of straight pars with birdies at nine and 10 for an opening 70 and racked up five more gains in the final round for a four-under-par 68 to win the fourth Sunshine Tour Junior Series event by two strokes on six under 138.

“It’s so great to be back,” said Lamprecht. “It was an unforgettable experience to compete for the International Team and I will really treasure the memories. The thing that impressed me the most was to meet the players at the main Presidents Cup and to see how down to earth they are, despite earning hundreds of thousands of dollars and Major titles,

“Some people might think it’s a let-down to play at home after the Junior Presidents Cup, but nothing beats coming home. I was so glad to see all my mates and to compete at home again.

“I had two solid rounds with just one bogey, but I was a little disappointed that I didn’t take better advantage of the par fives. I really battled to get the putter going in the first round, but I kept a clean card and trailed Ben (van Wyk) by two shots. I knew I had a chance if the putts started to drop.”

Lamprecht closed the gap with birdies at 12 and 14 and the GolfRSA player edged into the lead with back-to-back birdies at 18 and one. He pulled three shots clear of the pack with another gain at the third hole, but dropped a shot at the eighth.

“My tee shot finished left of the green and the chip rolled out, well past the hole and I had to two-putt for the bogey,” said the George golfer.

“I’m really glad that I came up earlier and played in the Bridge Fund Managers Junior Series event on Friday. The last time I played Clovelly I was just eight years old, so it helped to familiarise myself with the course again and to get a feel for the holes. It’s a great series and it’s awesome to see so many Under-13 players competing. What a great opportunity for them.”

“Between exams and competing in the Junior Players Championship and Junior Presidents Cup, I missed out on some tournaments, so I’m really happy I pulled it through. This win keeps me in third spot on the Junior Rankings and eligible for international selection, so this was a big result.”

Vorster, the 2017 Italian Under-16 champion, fired rounds of 71 and 69 to tie for second on 142 alongside Daniel Cronje from Boland, who posted a pair of 70s, while Germishuys finished third on three under 141 with rounds of 70 and 71.