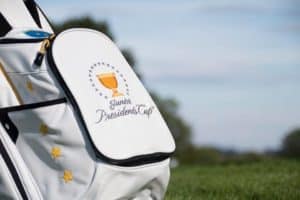 The event’s second edition will welcome 12 international players from  Australia, China, Chinese Taipei, India, Korea and South Africa and 12 juniors from 10 states in the United States.

South Africa will have the most representation on the International Team with five, while two Australians – Karl Vilips and Joshua Greer – will have the opportunity to compete on home soil. North Carolina and Texas will be represented by two players each on the U.S. Team.

U.S. Team qualification was determined by the Rolex AJGA Rankings, while International Team selection was based on the World Amateur Golf Ranking (WAGR).

All 24 players will compete in six Four-ball matches on Sunday morning followed by six Foursomes matches that afternoon. The Junior Presidents Cup will conclude with 12 Singles matches on Monday morning.

South Africa will have the largest representation with five players, including four of the top six in the standings. Karl Vilips (Australia), Jayden Schaper (South Africa) and Christo Lamprecht (South Africa) will make their second Junior Presidents Cup appearances after competing on the International Team in 2017.

At No. 47 in the WAGR, Australia’s Karl Vilips qualified as the No. 1 player for the International Team.

Originally from Perth, Australia, Vilips moved to Wesley Chapel, Florida, at 11 years old and has verbally committed to Stanford. Vilips is a three-time Rolex Junior All-American and owns five AJGA titles. As a member of the 2017 Junior Presidents Cup team, Vilips recorded a 1-2 record, which included a Singles match win over Prescott Butler.

Adding to the Australian contingent at the Junior Presidents Cup is Connolly’s Joshua Greer, who bookends the International Team as the last player to qualify at No. 12 in the standings. Currently No. 408 in the WAGR, Greer won the 2019 Western Australia Amateur, finished T17 at the IMG Academy Junior World Championship and qualified for his first U.S. Junior Amateur Championship this year.

Martin Vorster (No. 2) of Mossel Bay qualified as the leading South African in the standings following a successful summer that included a win at the East of Ireland Amateur Championship.

Vorster finished seventh in last week’s Junior PLAYERS Championship at TPC Sawgrass, which was won by South African counterpart Jayden Schaper, who notched his first AJGA Invitational title. The GolfRSA number one Schaper qualified for the Junior Presidents Cup at No. 3 in the standings behind Vorster.

Christo Lamprecht (No. 5), Samuel Simpson (No. 6) and Jordan Duminy (No. 11) round out the South Africans in the Junior Presidents Cup.

Jin, an Encinitas, California, resident, advanced to the final of the U.S. Junior Amateur before falling to U.S. Junior Presidents Cup qualifier Preston Summerhays, 2 and 1, at Inverness Golf Club.

Jin and Xu met earlier in the round of 64, where Jin was victorious, 5 and 4.

Jin is verbally committed to Oklahoma State University and was a 2018 Rolex Junior All-American.

India will have a representative in the Junior Presidents Cup for the second time with Kartik Sharma qualifying at No. 4 in the standings. Sharma has already won in Australia this year, having captured the New South Wales Amateur Championship at Terrey Hills north of Sydney.

Korea’s Jang Huyn Lee, a member of the 2022 high school graduating class, is the youngest player on the International Team. Lee has primarily competed in New Zealand since relocating there in 2015 but qualified for both the U.S. Junior Amateur and The Amateur Championship and finished T7 at the Junior PLAYERS Championship.

Five of the U.S. Team members are Rolex Junior All-Americans, nine have given a verbal commitment to play college golf and nine have competed in the AJGA’s annual East vs. West match play competition, the Wyndham Cup.

Maxwell Moldovan of Uniontown, Ohio, headlines the U.S. Team as the No. 1-ranked player in the Rolex AJGA Rankings following a T4 finish at the Junior PLAYERS Championship. Moldovan captured the match-play format Polo Junior Golf Classic at Liberty National in late June and added runner-up results at the Junior Invitational at Sage Valley and the Memorial Junior hosted by Sung Hyun Park to secure the Ohio State commit’s trip to Royal Melbourne.

Canon Claycomb of Bowling Green, Kentucky, sits at No. 3 in the Rolex AJGA Rankings and qualified as the No. 2 player in the Junior Presidents Cup standings. A two-time first-team Rolex Junior All-American and University of Alabama commit, Claycomb is the only member of the 2017 U.S. Junior Presidents Cup Team to qualify again in 2019. Claycomb delivered a 2-1 record at Plainfield Country Club in 2017.

Preston Summerhays (No. 6) of Scottsdale, Arizona, followed in Thorbjornsen’s footsteps by winning the 2019 U.S. Junior Amateur, which moved him into contention for a Junior Presidents Cup berth. Summerhays defeated International Team member Bo Jin in the Final match.

Duke University commit Ian Siebers began the Junior PLAYERS Championship at No. 16 in the Junior Presidents Cup standings, but a T7 result was enough to vault the Bellevue, Washington, native to No. 10 in the standings and punch his ticket to Melbourne.

Benjamin James of Milford, Connecticut, rounds out the U.S. Team as the only member of the 2022 high school graduating class. James is verbally committed to the University of Virginia.

The U.S. Team captured the 2017 Junior Presidents Cup with a 14-10 victory over the International Team at Plainfield Country Club in Edison, New Jersey.