Bianca to join Lara in Jakarta

Former Boland Ladies Golf President Cynthia Rayner was elected Women’s Golf South Africa President at the Annual General Meeting held in Rustenburg last week. She takes over from Erica Lefson who has been in the chair for the past three years.

Eddie Luckhoff, former long serving South African Golf Association Executive Member and President of North West Province Golf Union, died at 03h25 on Saturday in the Lamprecht Hosiptal, George. He was diagnosed, two years ago, with cancer, a malignant tumour in his kidney.

It was certainly a case of a one horse race in both the A and B Sections of the South African Under 23 Inter Provincial Teams Championship which was decided at Goose Valley Golf Club and Estate in Plettenburg Bay, Southern Cape last week.

It was sweet revenge for the South African team as they took on Kenya in their back yard and beat them in the Africa Zon VI Championship which concluded today (Friday). The four round championship was staged at the Nyali Golf and Country Club in Mombasa, Kenya. In all ten African countries were represented.

SA have slender lead going into final round

The South African eight man team have a slender lead going into Friday’s fourth and final round of the annual Zone VI Championship which is being played at the Nyali Golf & Country Club near Mombasa, Kenya.

Match Play golf can be unpredictable and never more so than in today’s semi-final matches at the Sanlam South African Women’s Amateur at Rustenburg Golf Club. 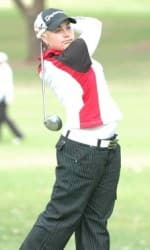 Defending champion Kim Williams ousted Nicole Becker 5 and 4 and Iliska Verwey hammered Talia Nel 8 and 6 to set up a much anticipated semi-final clash at the Sanlam Women’s SA Amateur Championship at Rustenburg Golf Club this afternoon.

Nobuhle Dlamini, the 2009 Match Play champion in 2009, maintained her status as one of the favourites in the Match Play Championship.

Ace helps Herselman to second round at SA Amateur

Many club golfers never achieve the much coveted hole-in-one, much less under pressure in tournament play, but Anel Herselman managed to get her first on her way to winning her first A-Flight match in the Sanlam Women’s SA Amateur Match Play Championship.

RUSTENBURG, North West (12 April 2011) – Ten-year-old Woo-Ju Son from Korea didn’t miss a beat as she rolled in her final putt at the ninth green and flipped her cap to acknowledge the crowd applauding her B-Division victory in the Sanlam Women’s SA Amateur Stroke Play Championship.

The pint-sized player from Bryanston Golf Club had a stronghold on this tournament at Rustenburg Golf Club from the very first hole.

RUSTENBURG, North West (11 April 2010) – On a day when the next-best round at Rustenburg Golf Club was a frustrating one-over-par 73, Swaziland’s Nobuhle Dlamini fired a four-under-par 68 for a share of the second round lead at the Sanlam Women’s SA Amateur Stroke Play Championship.

At the Annual General Meeting of Women’s Golf South Africa, held at Rustenburg Golf Club last night, Cynthia Rayner was elected as President, taking over from Erica Lefson who has been in the chair for the past three years.

Karen Olivant from KwaZulu Natal was elected as Vice-President.

Verwey keeps her nose ahead at Sanlam Women’s SA Amateur

RUSTENBURG, North West (10 April 2010) – It wasn’t a great round by her standards, but overnight leader Illiska Verwey did enough to hold on to share the early clubhouse lead with Swaziland’s Nobuhle Dlamini, pictured here, in the second round at the Sanlam Women’s SA Amateur Stroke Play Championship.

Dlamini, who won the Match Play title in 2009, dropped just one shot on her way to a four-under-par 68 for a share of the lead with Verwey, whose four bogeys added to a frustrating two over 74 and a 36-hole total of three-under-par 141.

RUSTENBURG, North West (10 April 2010) – Illiska Verwey stamped her authority on the Sanlam SA Women’s Amateur Stroke Play Championship when she opened up a yawning gap on her challengers in the first round at Rustenburg Golf Club.

The 22-year-old from Craddock continued her fine run of recent form with a five-under-par 67. She leads by three shots from defending champion Kim Williams, local favourite Bertine Strauss, Monique Smit and Nicole Becker.